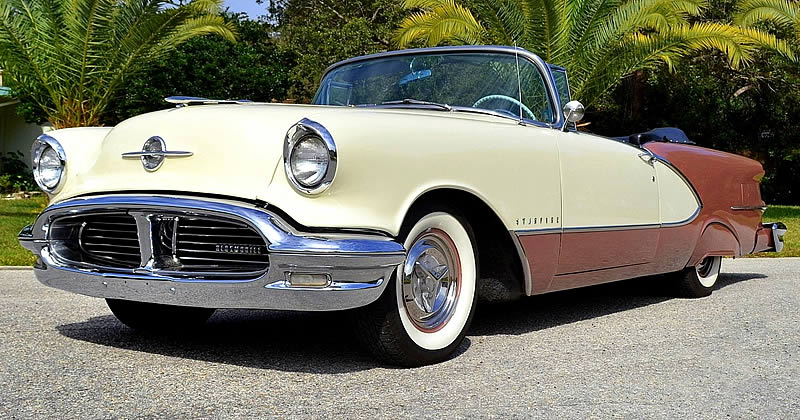 The Ninety-Eight was the top-of-the-line series for Oldsmobile back in 1956. Introduced in 1954, Starfire was the unique name for the convertible (although in 1957 all the 98s got the name Starfire).  The name was then reused for a model in its own right in 1961 and it lasted for a further 20 years.

The Ninety-Eights had a unique wheelbase that was two inches longer than the Eight-Eight and Super 88 below them. The '56 models were very similar to the '55s with a new grille assembly and different side trim.

This beautiful 1956 Ninety-Eight Starfire Convertible has been the subject of a tasteful restoration.

Ninety-Eights were luxurious anyway but the Starfire came with an all-leather interior. A padded dash was also standard as was power steering, power windows, powered front seat adjustment, an electric clock and deluxe steering wheel. You'd have to pay a further $96 for a radio though! Convertibles came with a leather interior

Under the hood is a 324 cubic inch "Rocket" engine paired with a Jetaway Hydra-Matic automatic transmission - both standard for the Ninety-Eight Series. Oldsmobile had given their customers the greater power they had been after with a total output of 240 horsepower which was up from 202 the previous year. Oldsmobile produced 8,581 Ninety-Eight Starfire convertibles for the 1956 model year. At a base price of $3,380 it was significantly more expensive than a Chevrolet Bel Air convertible.

This 56 Oldsmobile is currently for sale on eBay. (follow the link for even more photos﻿)