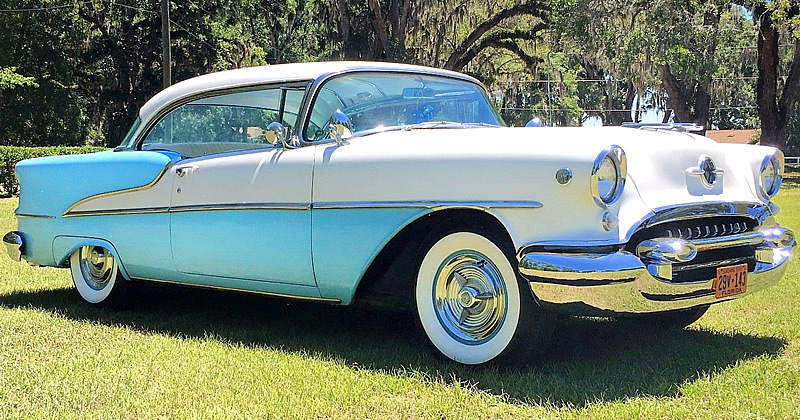 After the big changes the year before, the 1955 Oldsmobiles experienced a mild facelift. Most notably the combined grille and bumper setup, new taillights and "flying colors" side trim giving a new look to the two-tone paint combinations.

The Super 88 sat in the middle of three series available from Oldsmobile in 1955. This Polar White over Frost Blue 2-door Holiday Hardtop was one of five models in the Super 88 line-up.

The "Holiday" designation was Oldsmobile's marketing name for the pillarless hardtop design. It proved to be a popular design and when a 4-door version was released half-way through the model year it sold nearly 50,000 units.

Oldsmobile continued the two round dial theme for the dash. This car is also fitted with the optional Super Deluxe AM radio (center) The Super Eighty-Eight enjoyed a more luxurious interior than the standard Eighty-Eight. This included full carpeting and better upholstery options. Priced at $2,714 the Super Eighty-Eight 2-door Holiday Hardtop was a popular car for Oldsmobile who managed to sell 62,534 of them.

This Super 88 is currently for sale on eBay. (follow the link for even more photos﻿)

Comprehensive discussion of the development of the first post-war Oldsmobiles, going right through to the fins and chrome of the fifties and right to the beginning of the muscle car era.  Contains superb collection of descriptions and specifications.

Check it out on Amazon
Share3K
Tweet
Pin127
4K Shares