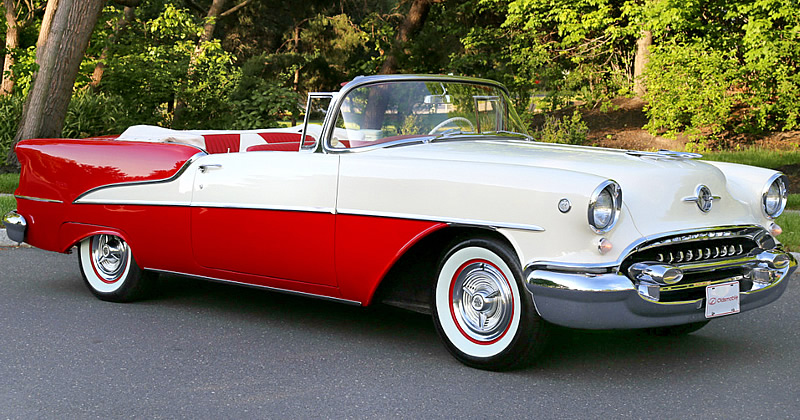 It was 1955 and Oldsmobile were out in front... with the new "Go-Ahead" look! At least that's what their sales literature was saying. The reality was that it was a minor restyle having revamped the cars completely the previous year.

They had already produced a great-looking automobile so minor styling changes were enough to give the buyers something a little more fresh. What they did also get was a more powerful "Rocket" engine and plenty more color choices with a total of 75 color combinations (up from 57). This stunning 1955 Oldsmobile Super Eighty-Eight Convertible is in one of those new color combinations - Burlingame Red over Polar White. The public must have loved them as Oldsmobile sales were up nearly 65% from 1954 figures.

The '55 is instantly recognizable with its distinctive "Flying Colors" tapered teardrop that ran rearward over the rear wheels.

Having had a frame up restoration, this 98,000 mile car looks showroom fresh.

Side view with the top up.

Inside, the convertible Super 88 enjoyed a leather interior as standard. Under the hood there is a 202 horsepower, 324 cubic inch "Rocket" V8 engine which was the more powerful of the two engines Oldsmobile had on offer for 1955.  This is paired with Hydra-Matic Drive automatic transmission which would have cost an additional $178. Oldsmobile managed to sell a total of 9,007 Super 88 Convertibles for the 1955 model year at a base price of $2,894. It was the most expensive of the middle series cars. In addition to the Hyrda-Matic transmission mentioned above, this car also benefits from: power steering ($108), Pedal-Ease power brakes ($38), DeLuxe wheel covers ($28), padded instrument panel ($17) and a DeLuxe radio ($94).