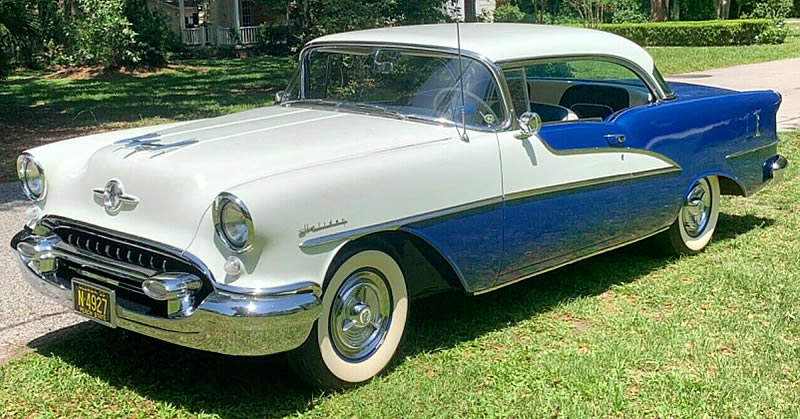 More power, more colors inside and out and Flying Color styling was how the Oldsmobile marketing department were describing their beautiful cars for 1955.

Holiday was Oldsmobile’s name for their pillarless hardtop models.

The Ninety-Eight had a longer wheelbase than the other series in the lineup at 126 inches rather than 122 inches. This car is in Polar White over Bimini Blue metallic paint.

Even more colors were available in ’55 over the previous year – a total of nineteen solid colors and seventy-five two-tone combinations were available for the exterior. Oldsmobile described there new, more colorful cars as their Flying Color scheme and was shown off with their side profile “GO-AHEAD” look, a combination of the swept-cut wheel openings and attractive molding package that separated the two-tone colors. This car shows off the Polar White over Coral combination.

Interestingly, only the 98 had a true swept-cut rear wheel opening. The Eighty-Eight and Super Eighty-Eight all used a rear fender skirt that was cut to give the appearance of one.

Even more fabrics and colors were on offer for the interior too.

This ’55 Oldsmobile 98 is currently for sale on eBay. (follow the link for even more photos)