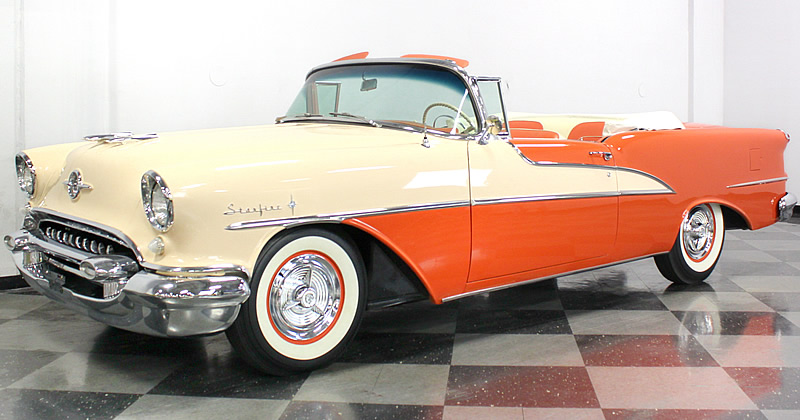 Here’s a very striking car and color combination. A 1955 Oldsmobile Ninety-Eight Starfire Convertible in Coral and Caspian Cream. Together with the new side trim this was Oldsmobile’s new “flying-color” styling!

It was Oldsmobile’s finest, their flagship model for 1955. Competing with cars such as the Buick Super, Chrysler Windsor Deluxe, Packard Clipper Custom etc.

There was a new bumper and grille up front although it kept that distinctive Olds look by retaining the over-arching upper grille. At the rear, taillights were also revised.

The Ninety-Eight was 212.4 inches long with a wheelbase 4 inches longer that the Eighty-Eight at 126 inches.  You’ll notice the swept-cut rear wheel opening of the “98” on two-door models – other models used a rear fender skirt shaped to give the impression of “swept-cut”.

For that added touch of luxury the convertible came with cushion lounge leather seats and two-tone color scheme to match the exterior. Oldsmobile described it as “glamor–on–the–go“. It came complete with power windows which were standard on convertibles but an $80 on other models. This car is also fitted with air conditioning which, for 1955, had just been moved under the hood from the trunk. Now cowl-mounted, the ducts and vents were integrated into the instrument panel. This gave more room in the trunk and the interior looked better for it too.

Power comes from the 202 horsepower 324 cubic inch V8 Rocket engine with 4-barrel carburetor. This is paired with the Hydra-Matic Super Drive automatic transmission – a $165 option over the standard 3-speed manual.