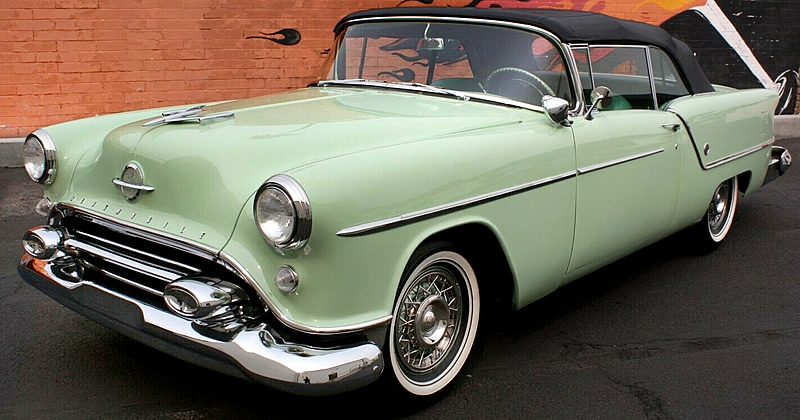 This 1954 Oldsmobile Super Eighty-Eight Convertible  looks fabulous in its Glacier Green paint and is set off nicely with its striking green and black leather interior.

Power comes from the original 324 cubic inch “Rocket” V8 engine with 4 barrel carburetor. She’s an automatic too, fitted with a Hydra-Matic transmission.

Oldsmobile introduced a complete restyle in 1954 so this is a second generation Eighty-Eight and it lasted through to 1956. The Super was a step up from the standard Eighty-Eight and you could expect extras like; chrome rocker panel moldings, deck lid ornament and foam rubber seat cushions.

There aren’t many of these around, our records tell us that Oldsmobile only made 6,452 Super Eighty-Eight Convertibles for 1954.

This was the year that a “safety” padded dash was now available – yours for just $17!

If you had ordered one of these when they were new the base price would have been around $2,615.

Added to that, this car has power brakes (a $37 option) , power steering (a $125 option) and the Hydra-Matic Super Drive automatic transmission would have added a further $165 to the base price.

This ’54 Super Eighty Eight Convertible is currently for sale on eBay. (follow the link for even more photos)