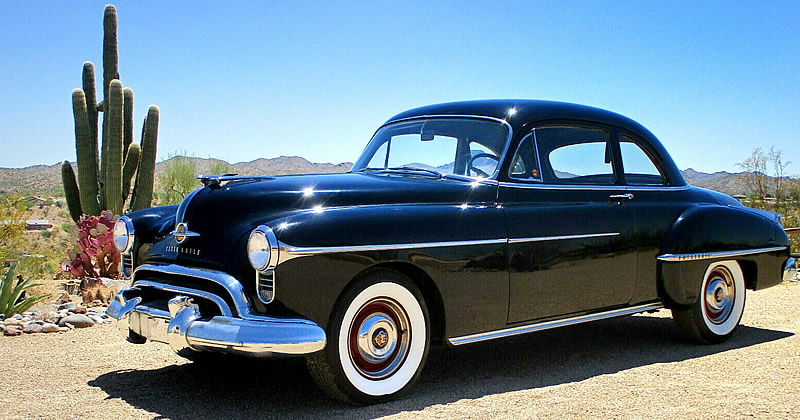 The 88 came standard with a 303.7 cubic inch Rocket V8 engine. This car is equipped with a Hydra-Matic Drive automatic transmission which would have cost the original owner a further $158 on their purchase price.

Clearly a well-loved original car that has been garaged most of its life and has just 46,000 miles on the odometer.

Inside, the car has received new black leather upholstery.

Of the seven different models in the Eighty-Eight line-up in 1950, there were five 2-doors and two 4-doors available.

The Eighty-Eight was available in both standard and Deluxe versions. The club coupe would have cost $1,978 with the Deluxe option costing approximately an additional $78. For the extra you got: stainless steel gravel shields and extra chrome moldings on the exterior. Inside, the interior seating used foam rubber seat cushions, there were robe rails, a DeLuxe steering wheel and instrument panel that included a clock as standard.

This ’50 Oldsmobile 88 is currently for sale on eBay. (follow the link for even more photos)