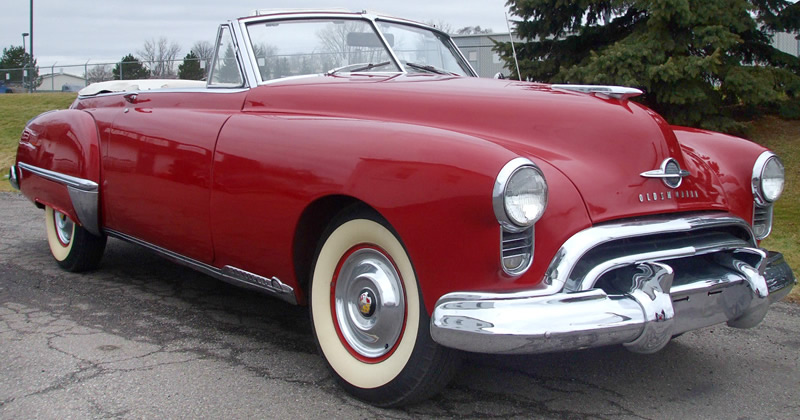 The Ninety-Eight Series was the top-of-the-line for Oldsmobile in 1949. But it was more than that. It was the “FuturamicNinety-Eight“.  The interest in space was on the rise and we were about to enter the fifties.

In 1948 Oldsmobile had decided, once again, to offer different body styles for each Series during the model year. By 1949 they had trimmed this down to two styles. The lower models shared the same body, but the 98 was reserved for some special treatment. This 1949 Oldsmobile Ninety-Eight Convertible carried on with that unique and Futuramic styling.

Just like the Seventy-Six and Eighty-Eight Series’ beneath it, the Ninety-Eight Series contained both standard and DeLuxe models. The convertible fell firmly in the DeLuxe camp offering such extras as: front and rear floor mats, DeLuxe steering wheel, chrome wheel trim rings, and, for the convertible only, leather seats and a power top.

Proud of their “New Look” from the previous year, Oldsmobile were now shouting about, “The New Thrill”! Not just the thrilling eye-appeal but the Thrill of the performance too.

Brand new for 1949 was Oldsmobile’s overhead valve, 303.7 cubic inch V8 engine producing 135 horsepower. Affectionately known as the “Rocket 88“. A name that carry on through the fifties and would cement itself in people’s minds, especially when it became the title of a Rhythm and Blues song recorded in 1951.

All Eighty-Eight’s and Ninety-Eights came with Hydra-Matic automatic transmission as standard.

Inside there is a lovely leather interior and you can just about see in the center of the DeLuxe steering wheel, the ‘Planet and Stars’ hub. In the center you can see the clock which was standard on the DeLuxe and the radio which would have cost $98 extra.