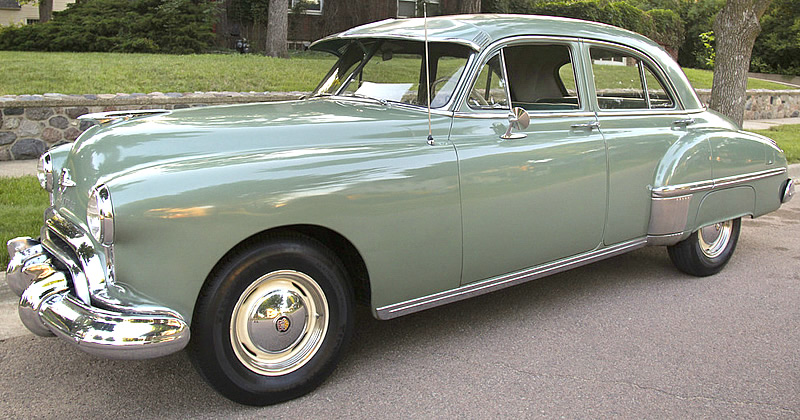 It's always great to see an old car that is mostly original. What makes this 1949 Oldsmobile 76 4-door Sedan all that more special is that since it was sold new in Ankeny, Iowa, it's covered just over 11,500 actual miles.

The story goes that this car was purchased off of the estate of an elderly lady. Her and her husband bought the car new and sadly he passed less than 5 years after buying it. The husband had a work truck and she didn't drive. So it was used when she wanted taking somewhere and the husband (and later the son) would drive her.

The car was always washed, well maintained and always put away at night. Following the husbands death it didn't move for a couple of years so they decided to remove the battery, put it up on blocks and cover it. There is sat in the dry garage for decades! Sure, it's got some flaws but it's an unmolested example that was carefully recommissioned. Even the Sea Foam Green metallic paint is original.

Check out that dash - it looks almost new. The seat covers you see here were added by the dealer and have never been taken off. Imagine what that broadcloth upholstery is like underneath having never been directly sat on. The 76 Series cars are powered by a 257 cubic inch "BIG SIX" six-cylinder engine. It came standard with a 3-speed manual transmission. However, the original owner of this Olds opted for a Hydra-Matic Drive automatic transmission at an additional $185. While the Seventy-Six was the bottom of the line for Oldsmobile it was pretty much indentical to the Eighty-Eight except the engines. So, if you were happy with a six it was a good value automobile.

This car is a Deluxe, an option that cost around $142 and offered an electric clock, DeLuxe steering wheel, rear fender skirts and chrome wheel trim rings. Other options on this car include an AM radio costing a further $88 and a sun visor (no original price available).

This Oldsmobile is currently for sale on eBay. (follow the link for even more photos﻿)

Comprehensive discussion of the development of the first post-war Oldsmobiles, going right through to the fins and chrome of the fifties and right to the beginning of the muscle car era.  Contains superb collection of descriptions and specifications.

Check it out on Amazon
Share4K
Tweet
Pin130
4K Shares