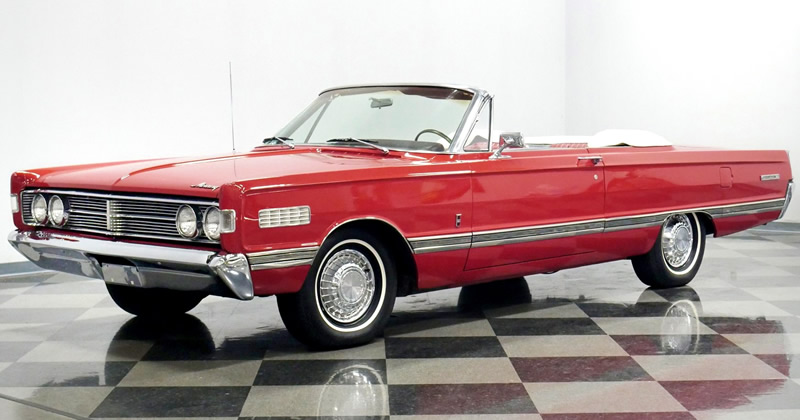 The Park Lane had been around since the 1958 model year and aimed as a premium, full-size model for Mercury.

In it’s second generation since 1964,  the 1966 Mercury Park Lane Convertible you see here was now much more of a slab-sided affair than it was previously.

Looking great in the rather striking Cardinal Red paint, the car also enjoys the benefit of power brakes and power steering, options costing $43 and $106 respectively when the car was bought new.

Looking along the side we can see the lower body molding running the full-length of the 220 inch body – something that is unique to the Park Lane. At the rear there are the new for 1966, wraparound taillights.

Convertibles enjoyed an all-vinyl interior and this one certainly looks in great shape. The instrument panel looks very classy and walnut-toned applique adorn the lower portion as well as the door panels.

The ’66 Park Lane came equipped with a 330 horsepower, 410 cubic inch Marauder V8 engine with 4-barrel carburetor. This was paired with a Merc-O-Matic 3-speed automatic transmission (C-6).

However, the original owner of this Park Lane opted for the biggest and most powerful engine Mercury had on offer that year. Under the hood of this car is a 428 cubic inch big block V8 that outputs 345 horsepower. This would have cost an additional $406.

Mercury produced just 2,546 Park Lane convertibles for the 1966 model year at a base price of $3,608 making it the most expensive of the series. How many are left is anyone’s guess but we suspect there aren’t too many, especially in this condition.

This ’51 Pontiac Chieftain Convertible is currently for sale on eBay. (follow the link for even more photos)