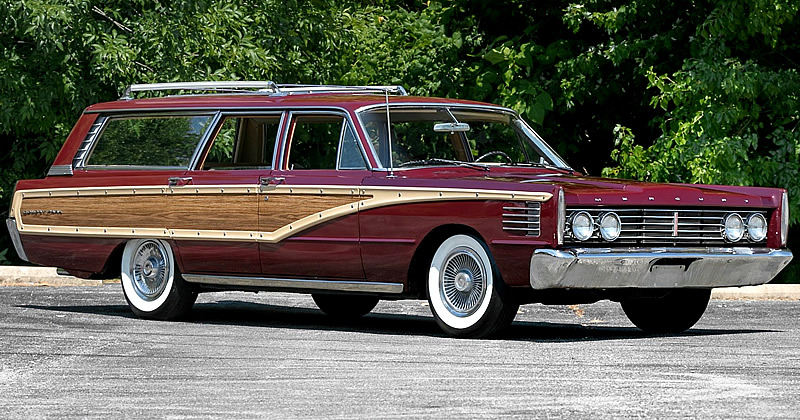 The 1965 Mercury Colony Park sat in the medium-class Montclair line-up. It was a bit more expensive than the other Montclair cars. In fact, the price took it right into Park Lane territory – Mercury’s top-of-the-line cars.

The Colony Park was instantly recognisable over the Commuter (the cheaper Monterey station wagon) because of the exterior simulated wood grain.

The Colony Park was first seen in 1957 and by 1965 it was in its third generation. The model name was to survive right up until the 1978 model year.

This rear shot shows the slab sides that Mercury cars were known for and differentiated them from their Ford cousins.

This extra seat can fold away giving more cargo area. With the back seat also folded down this gave a total of 91.3 cu. ft. of space.

Somewhat rarely, this area is in remarkable condition. It doesn’t look like much junk was hauled around in this beauty. It is show here with the 3rd row seating in the upright position. I’m sure that some of our readers remember sitting in a seat like this when they were younger.

Inside there is a really nice vinyl interior in great condition. Also fitted is the original AM radio which would have cost an additional $61 when the car was originally purchased. Note the air conditioning unit mounted in the center under the dash.

Standard on both Monterey and Montclair cars was a 390 cubic inch V8 that output 250 horsepower. This car is also fitted with power steering which was a $106 option.

It’s always nice to see a survivor car and none more so than a classic station wagon. These cars tended to have a much harder life which makes the old ones so much more special.

This 1965 Colony Park is currently for sale on eBay. (follow the link for even more photos)