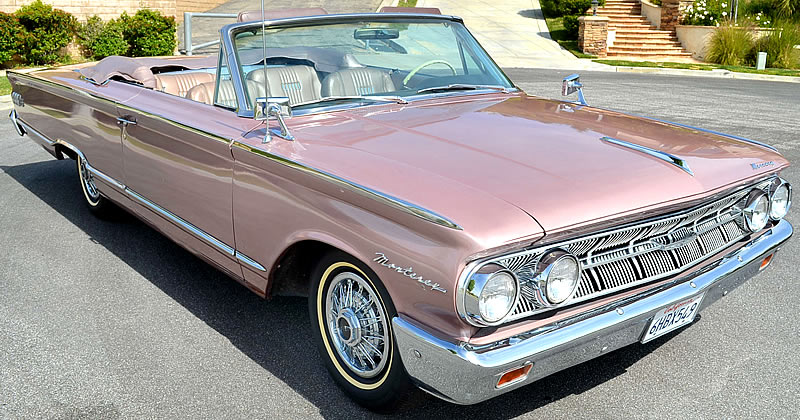 The completely restyled Monterey sat at the top of the line for Mercury in 1963 with the S-55 being the special performance series. It offered the luxury of the Monterey Custom plus some “sports car” features such as: a more powerful engine, deep-contoured bucket seats, floor console that included a storage compartment, padded instrument panel and special interior trim.

Much like the Ford Galaxie 500 also had the 500XL, the S-55 was Mercury’s equivalent. It was set to compete with cars such as the Buick Wildcat, Dodge Polara, Oldsmobile 88 and Pontiac Star Chief & Bonneville.

This 1963 Mercury Monterey S-55 Convertible is mostly original and presented here in its original color Pink Frost Metallic, which was the slightly darker of two pinks available that year.

A the rear Mercury had moved back to three taillights per side as they had in 1961.

The interior is in great shape and presented in Medium Rose.

Under the hood there is a Marauder Super 390 cubic inch V8 with 4-barrel carburetor outputting 300 horsepower paired with a Merc-O-Matic automatic transmission.  The latter was standard although buyers could opt for a 4-speed manual at no extra cost.

Mercury produced just 1,379 Monterey S-55 Convertibles for the 1963 model year at a base price of $3,900 – that’s around $600 more than the Monterey Custom Convertible of the same year. Also added to this car when it was originally built in Wixom, MI where options including power steering ($82), power brakes ($43) and push-button AM radio ($59) were added.