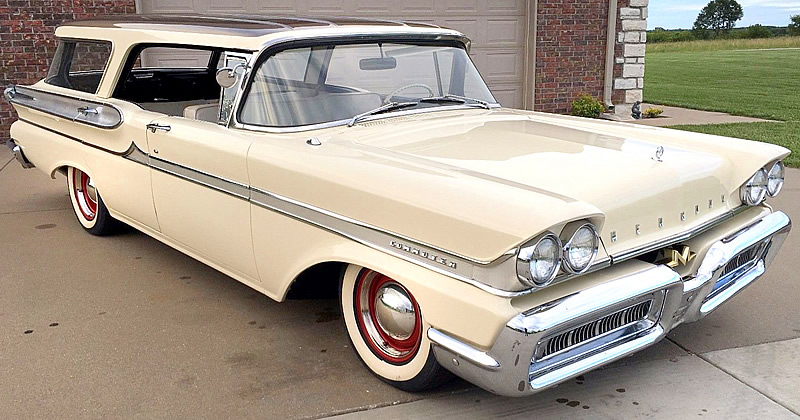 This 4-door 1958 Mercury Commuter Station Wagon is on just its third owner and has done just 80,000 actual miles since it was built in Wane, MI.

The Commuter was an equivalent model to the Monterey Series in terms of trim / appointments. Three of the six station wagons wagons that Mercury had available for 1958 were in the Commuter line-up.

Not too much had changed to the external appearance of the ’58 Mercurys compared with the ’57. Rather than a horizonal grille and twin-pod grille structure it had been replaced a split grille enclosed in two giant bumper sections.

At the rear of the cars, the taillight assembly was altered slightly with projectile style lights replaced the previous wraparound lamps.

All Mercury station wagons in ’58 had hardtop styling – the lack of pillars gave the cars a much more open feel.

There is more than 87 cubic feet of load space inside. As Mercury put it in their sales literature, “Big enough to carry a rowboat inside!“

Inside sees a mix of vinyl and cloth upholstery. On the left of the steering wheel we can see Mercury’s Keyboard Control push-button transmission selector. It also is where the push-button start is located. Also note the optional padded instrument panel.

Under the hood there is a 383 cubic inch Marauder V8 engine with 4-barrel carburetor. Paired with the standard 3-speed manual transmission this output 312 horsepower. However, this car has the $252 optional Merc-O-Matic Drive automatic transmission giving an output of 330 horsepower.
1958 Mercury Marauder 383 V8

A total of 4,227 Mercury Commuter 4-door 9-passenger station wagons found buyers for the 1958 model year. If you wanted one back then the base price was $3,201.

1958 was a tough year for most automobile manufacturers but was particular rough for Mercury. Their sales were down well in excess of 50% over the previous year.