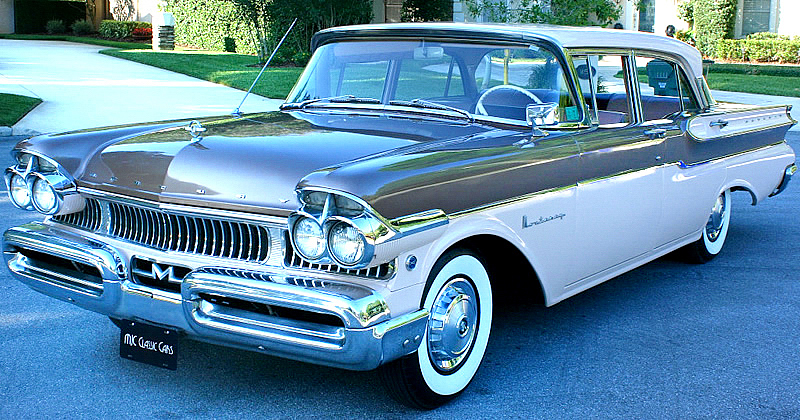 There’s only 53,000 miles since new on this 1957 Mercury Monterey 4-door sedan. There’s a lovely period feel with the two-tone Bronze and Pastel Peach paint.  It’s been in the same family since new and was passed from mother to daughter – a true survivor car that has been loved and cherished.

Although the car has had one repaint (in its original colors), everything else is original including the interior.

1957 was a major restyle year for Mercury and the first time the had bodies that weren’t just based on Lincolns or Fords. This was the first year for dual headlights too (Earlier models did start off with single and it was changed mid year). Check out that rear!

Mercury told us, “Dream-Car Styling complements and accentuates the low silhouette roof with beautifully concealed center posts… the rakish slant of the front head lamps… the forward thrust of new, graceful side projectiles. In side there’s lavish luxury in fabric, weave, and color.” Another great thing about this car is it is fitted with the optional 368 cubic inch TURNPIKE CRUISER V8 engine producing 290 horsepower. The standard engine with these cars is the 312 cubic inch V8 that produced 255 horsepower. Transmission is the rather cool Merc-O-Matic 3-speed automatic transmission with push-button selection on the dash. This was something a little more special than other push-button control as it also started the car.