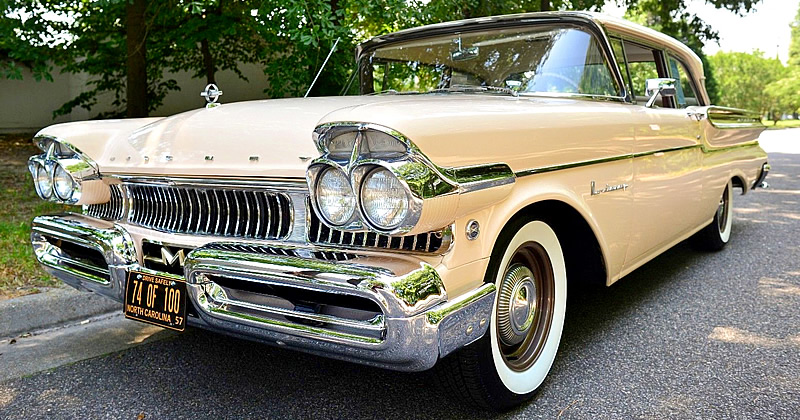 This is no ordinary 1957 Mercury Monterey 2-door sedan. It's fitted with the rare M-335 engine - a 368 cubic inch engine that outputs 335 horsepower. Built by Bill Stroppe as part of Mercury's NASCAR program this is one of just 100 2-door sedans made to their requirements (this is car #74). With only 38,000 original miles it makes this M-335 even more desirable.

Many people see the four headlights on a 1957 Mercury and assume it is a 1958. The truth is that during the 1957 model year production changed from two headlights to four. Only in two states, South Dakota and Tennessee, were quads still illegal at the start of the '57 model year. In total around one third of all Mercurys that year came fitted with the "Quadri-Beam" headlamps.

It was also the year that Mercury received their own unique line of cars sharing only mechanicals with Ford cars. They were also complete restyled making them larger with a new wheelbase of 122 inches.

Mounted on the left of the dashboard was Mercury's exclusive Keyboard Control - a transmission control for the Merc-O-Matic Drive. The radio you see in the center was a $95 option.

Under the hood we can see the desirable 368 cubic inch M-335 V8 engine with dual 4-barrel carburetors.