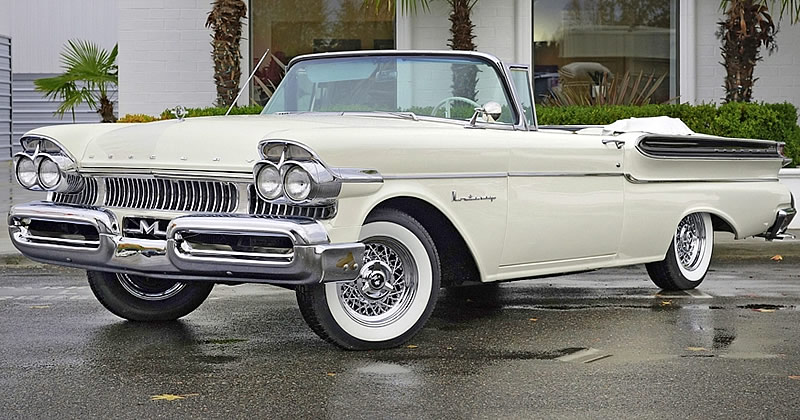 Mercury cars saw some daring styling changes in 1957. A complete restyle gave them a radical new look when compared to their predecessors. It was the first time Mercury were using bodies that were exclusive to the marque and not using something based on Lincolns or Fords.

And boy did they look great as we can see with this Monterey Convertible.

It always creates some interest when we show another 1957 car with quad headlights. It’s a common belief that quads started life in 1958 but this isn’t really true. Early Montereys had two headlights which later became four as the model year progressed a state laws changed.

Standard in the Monterey was cloth and vinyl upholstery but the convertible came with all-vinyl.

This car has a padded instrument panel which was part of the Safety Group options package that also included front seat belts and padded sun visors. The Deluxe radio that is just visible here was also an option. On the left you’ll see the push-button selector for automatic transmission.

The floorpans were now lower for ’57 giving more room inside.

This well-presented 312 cubic inch V8 with 255 horsepower was standard in Montereys and Montclairs. While the Montclair came with a Merc-O-Matic automatic transmission as standard, the original buyer of this Monterey would have paid an additional $226 on their purchase price to get one.

Mercury was now a mid-priced line and offered more luxury than its Ford siblings so, even though the Monterey were now the base models, they were priced slightly higher than the Fairlane 500s, Ford’s top of the line that year.

Other options on this car include power brakes and power steering costing $40 and $86 respectively.