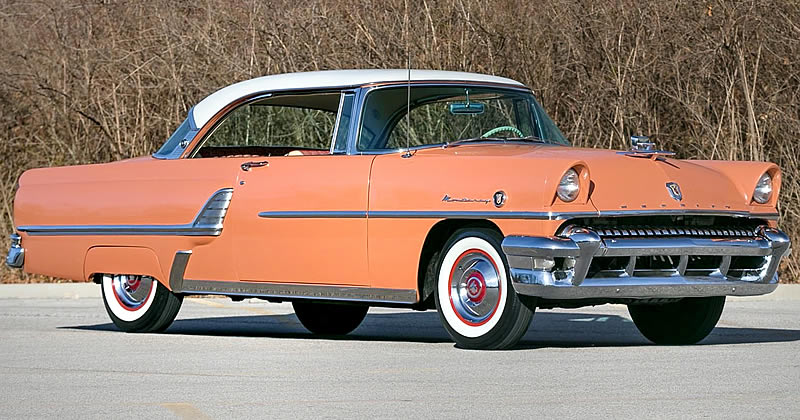 Having been originally built in the St. Louis assembly plant this 1955 Mercury Monterey Hardtop Coupe seems to have had a charmed life as, although restored, it is believed the 18,459 miles showing on the odometer could well be correct.

There was bold new styling for Mercury for the 1955 model year. It was also the year that the Montclair was introduced bumping the Monterey from the top slot in the Mercury line-up. It now sat in the middle of the range above the Custom Series.

At the front the grille inside the bumper was retained and the headlight housings were not too dissimilar to what we would see on Lincoln cars the following year. At the back there was a new taillight cluster at the ends of the rear fender. Was that the first hint of a tailfin?

In keeping with the colorful fifties, this year also saw the biggest selection yet of fabrics and colors available to Mercury buyers. The new V-shaped instrument cluster was also new with the speedometer set up in a fan shape. 1955 saw a brand new and more powerful engine too, taken from the Ford Thunderbird. There were 2 variants of this Super-Torque 292 cubic inch V8 too. This Monterey is equipped with the 188 horsepower version that used a 2 barrel carburetor. Also available was a Power Pack version with a 4 barrel carburetor providing a further 10 horsepower.

The Monterey came standard with a 3-speed manual transmission but the original buyer of this car opted for a Merc-O-Matic automatic transmission costing a further $190.

Other goodies that were added to the original bill included: heater and defroster (these still weren’t standard equipment) and an AM radio.

1955 was a good year for Mercury. Sales were up 27% from the previous year and they were named ‘Car of the Year’ along with Chevrolet in joint first place honors with their rival.