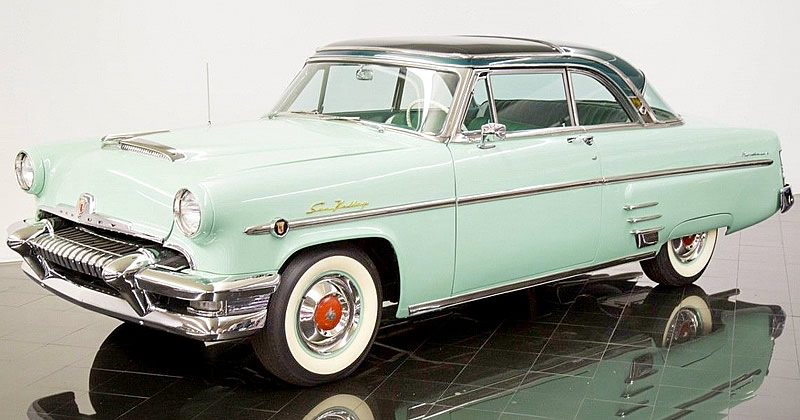 The 1954 Mercury Monterey Sun Valley is a 2-door hardtop with a dome of pure, green tinted plexiglass that covers the front compartment.

It gave closed-car comfort with the freedom and visibility of a top-down convertible – well, at least that’s what the marketing material of the time said.

The exterior is painted in the attractive Bloomfield Green over Parklane Green combination.

​Inside we have a green and white all vinyl interior. You’ll notice just behind the steering wheel are the Merc-O-Therm heater controls. There are four controls that regulate the heat, ventilation and defrosting.

There had been transparent roofs before but they were on concept cars. This was America’s first production transparent top car and it was all-new for 1954.

Power comes from a 256 cubic inch V8 engine producing 161 horsepower (up from 125 horsepower the previous year) connected to a Merc-O-Matic automatic transmission. The latter was a $190 option at the time of purchase. This particular car was also ordered with Merc-O-Therm heater and defroster ($74), AM radio ($89), power steering ($140) and power brakes ($48). It was built in the St. Louis, MO assembly plant.

Mercury produced 9,761 Monterey Sun Valley cars for the 1954 model year at a base price of $2,562 which was around $110 more than a standard 2-door hardtop. Another $48 would have bought you the convertible. Interestingly this was far less popular selling around 2,500 cars less.