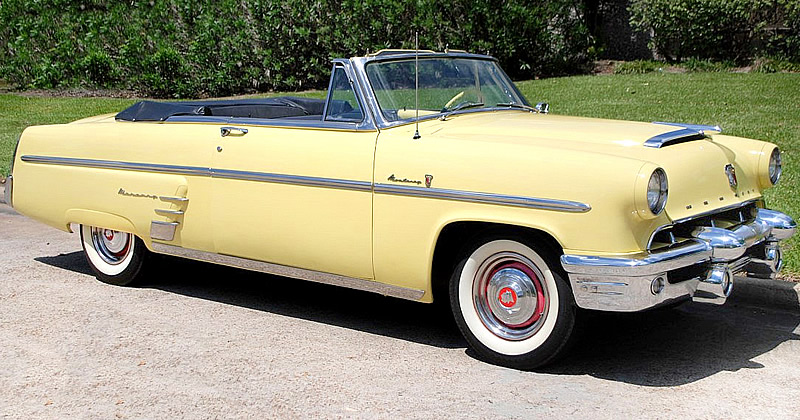 Having had a major overhaul the previous year, the 1953 Mercurys just received some more minor cosmetic changes. These included a revised bumper and grille assembly and a full length bodyside spear molding that helped give the cars a longer look. The hood scoop you see here was purely decorative.

Although it shared the Ford body shell the styling had more in common with Lincoln. From the double front bumper with dagmars and optional front fog lamps to the rear bumper shape, it was all very much Lincoln influenced.

Monterey was top of two series for Mercury in 1953 and enjoyed better appointments including chrome rocker panels, carpeting instead of rubber matting and was easily identified with

The convertibles benefited from all-vinyl interiors. Note the rather unique aircraft type levers for heater and vent controls mounted either side of the speedometer. Under the hood is a 255.4 cubic inch flathead V8 outputting 125 horsepower. It was the last year we'd see a flat head V8 in a Mercury.  This is paired with the optional Merc-O-Matic Drive automatic transmission. The latter was a $190 option at the original time of purchase. This particularly Monterey also has optional extras including: power steering ($151), radio ($106), fog lamps and heater ($72). This was actually the first year power steering was available. Introduced part way through the model year, only eight percent of 1953 Mercury's are fitted with it.

1953 was Ford's fiftieth anniversary year and the year that they built their 40 millionth car - that car just happened to be a Mercury Monterey Convertible.