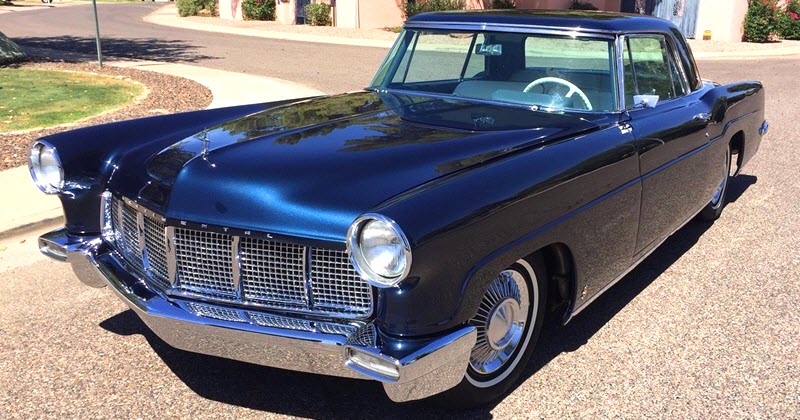 This beautiful 1957 Continental Mark II was one of the most expensive American production cars you could buy in its time. It would have stood out for its modern looks but sadly only lasted for two model years.

After the demise of the Lincoln Continental in 1948 the name was laid to rest for several years. Ford decided in the early fifties that it wanted a modern, luxurious and powerful car that maintain the exclusivity of the original Continental. The Mark II was then born for the 1956 model year.

Although often referred to as a "Lincoln Continental", Continental was actually an independent Ford division. Apart from providing the powertrain and the dealer network, Lincoln didn't really have a lot to do with the development of the Mark II.

Early prototypes even included a retractable hardtop - the mechanism of which was adapted for the 1957-59 Ford Skyliner Retractable! Two convertibles were made but did not make it into general production.

Interesting to note was the fact that a Mark II chassis was used to produce the Lincoln Futura concept car. This, in turn, was the car used to build the original Batmobile by cusomizer George Barris.

Power comes from a 368 cubic inch V8 with 4-barrel carburetor producing 300 horsepower. This is paired with a Turbo-Drive 3-speed automatic transmission. These were hand picked and hand balanced and refined with the closest tolerance parts possible - all giving the smoothest running possible.

We can see at the rear of the car, Continental's take on the Continental kit. Rather than a addition to the rear bumper this was formed into the trunk. This would become a familiar sight in later Lincoln Continentals.

The Mark II Continental lasted two years. Sales in 1956 were relatively good at over 2,500 cars but sales dropped in 1957 to just 444 units. But, let's face it, the market for $10,000 cars in the fifties was going to be limited. All this attention to detail was costing money - twice as much labour than other cars would get.  Even at the $10K price tag it wasn't the most profitable of exercises. This was the end for the car and the division. This is when the name became part of the Lincoln family.

One of these cars was bought by Elvis Presley when, in early August 1956, he traded in his '56 Lincoln Premiere to get his Mark II.

A Continental Mark II would have cost you $9,695 if you had ordered one new for the 1957 model year. The factory air conditioning on this car would have added a further $595 to the purchase price. While it was expensive, the materials used we the best available and the car went through extensive inspections during its build.

This is a difficult car to compare to others but in terms of cost the nearest American automobile would be the Cadillac Eldorado. In fact, at the time, you could buy TWO standard Cadillacs for the price of a Mark II.

There are under 33,000 miles showing on the car. They are believed genuine due to the lack of wear on the car and significantly, when the belts were recently replaced the old ones turned out to be the originals!

The Lincoln Continental Story From Zephyr to Mark II

Covers the development of the Lincoln-Zephyr to into the original 1939-40 Lincoln Continental right through to the 1956-57 Continental II.

Check it out on Amazon
Share1K
Tweet
Pin20
1K Shares