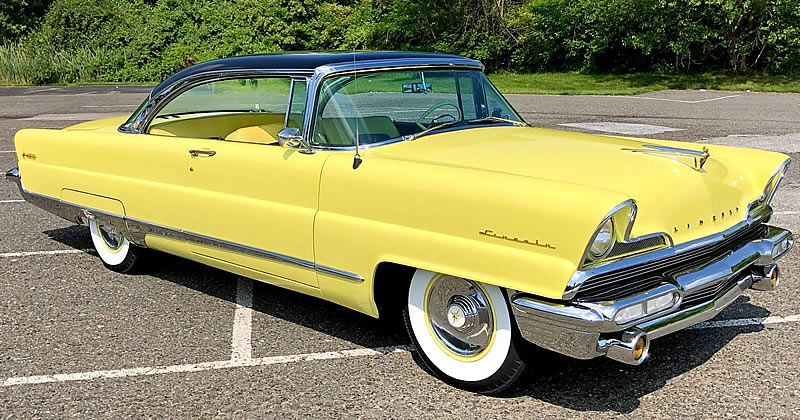 It was brand new for 1956 and helped increase Lincoln sales by nearly 85 percent from the previous year, the Premiere had arrived!

The Premiere didn’t replace the Capri series but became the new top-of-the-line series offering more features and luxury. There were three models available, a 4-door sedan, convertible and the best-selling hardtop coupe you see here. Between them sales totalled 41,531 cars.

The step-up in luxury was clearly proving popular with the discerning public as Lincoln made a big push to grab some of Cadillac’s customers.

Everything was new this year, Lincoln had undertaken a bold restyle and it was working. Starting with a new, three inch longer wheelbase, they had redone everything while still managing to maintain a connection with the previous year. 1956 was also the first time that Lincoln had used a wraparound windshield.

Inside, the pastel yellow and black leather interior complements the exterior perfectly. While all leather was standard in the Premiere convertibles it would have been an option in this car because standard seating would have been cloth and leather.

Note the rather unusual door handle found on these cars.

Power steering, power brakes and power assisted windows were all standard on the Premiere. Radios however were an additional $100. This car also has air conditioning which was a $595 option.

Under the hood there was just one engine available, a 368 cubic inch V8 that output 285 horsepower. This was mated to a Turbo-Drive automatic transmission as standard.

To put the price into perspective, the Coupe was nearly $2,500 more than Ford’s Fairlane Victoria hardtop.

This ’56 Premiere is currently for sale on eBay. (follow the link for even more photos)