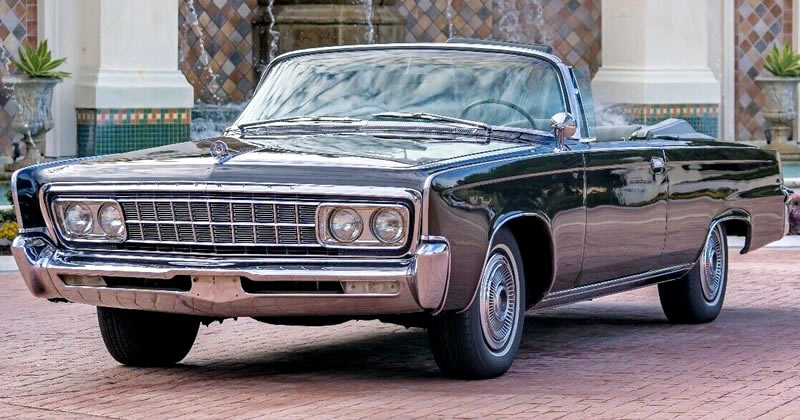 It was more than twice the price of a Chevy Impala convertible but fully loaded as standard and now considerably rarer – The Imperial Crown was a car that could comfortably compete with the Cadillac Eldorado.

This was the last year of the Lincoln Continental styling that lasted for three years. Much of this influence would have been due to the fact that Chrysler had actually hired the former Ford stylist, Edward Engle who had previously worked with the 1961 Ford Thunderbird and Lincoln Continental.

Things had not changed much from the 1965 Imperial Crown with the most distinctive change being a new ice cube tray style grille.

The green leather interior complements the, not often seen, code GG Sequoia Green exterior – yes it is a very dark green that looks very dark and almost black in the photos.

The beautiful and extensive Claro Walnut applique that extends even to the seat backs, is a two-year only feature.

Under the hood was the brand new for ’66, 440 cubic inch V8 that output 350 horsepower. This new and improved engine has arguably made the 1966 models the most desirable of the three years of ‘continental style’ cars.

It would be fair to compare the price of the 1966 Imperial Crown to the Lincoln Continental of the same period. Both were a similar price but the Crown Convertible was about $200 cheaper at $6,146 but the slightly cheaper price point was not enough to make any more than 514 sales. This has made these cars all the more rare today.

This ’66 Imperial Crown Convertible is currently for sale on eBay. (follow the link for even more photos)