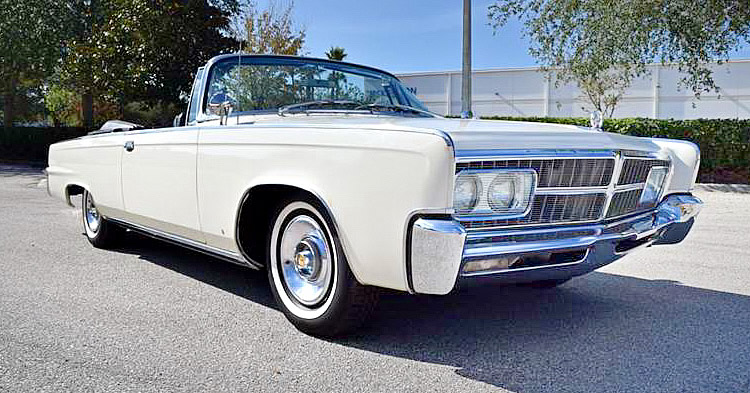 With low production numbers here's a car that you don't come across very often - a 1965 Imperial Crown Convertible.

Designed to compete with Cadillac it had a tough time making a dent in their sales. Cadillac were already at the top of the market and the Crown Convertible was $600 more expensive than a deVille convertible. To top it off Cadillac had just introduced some fine looking cars for '65 as they moved away from the fins era.

At the front there were glass highlight covers which was an interesting styling feature that year.

Inside there is the luxury of leather seats in plum.  Standard equipment includes power windows, power seats and a flick of a switch brings the top up and down.  Of course this luxury car also has power steering and brakes.

Note the rare Claro Walnut inserts on the instrument panel and doors. Chrysler claimed that out of each 52 1/2 llbs of harvested Claro Walnut that they could find only 8 oz. fit for Imperial. Also standard on the car is a TorqueFlite automatic transmission.

This Imperial is currently for sale on eBay. (follow the link for even more photos﻿)