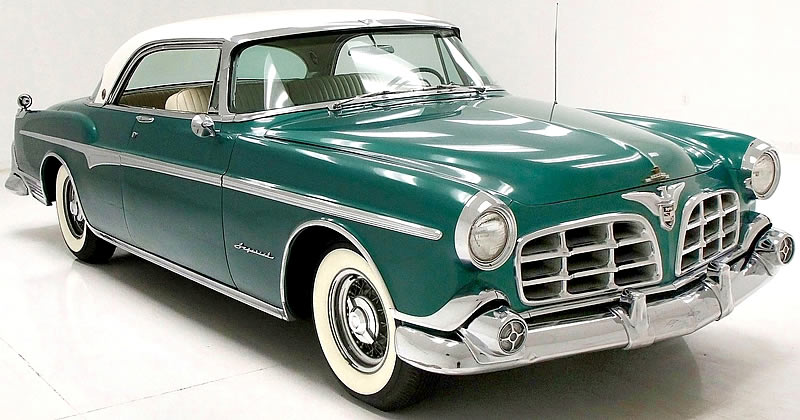 It was the 1955 model year and Imperial was now a make in its own right, separate from Chrysler. “Classic proportions, exquisite appointments” was the order of the day. We can see how this is true of this 1955 Imperial Newport in Jade Green paint.

Despite this separation, Imperial still shared its body shell with Chrysler cars. What was different was the wheelbase of the Imperials which was 4 inches longer at 130″, giving more legroom. The split grille was also shared with the Chrysler 300.

It was an exciting year for cars in the Chrysler family with the introduction of the “Forward Look”, a major styling revamp by Virgil Exner.

What external feature did distinguish Imperial from Chrysler cars in 1955, was the rather unique “Gunsight” taillights mounted on the rear fenders.  Something that was kept for the following year and then used again in 1962.

Inside the dash / instrument panel is what you’d expect from a luxury car. The seats are trimmed in white leather with a green and white dash to complement the exterior.

Power windows, power brakes and power steering where all standard. As was the powered front seat. An extra-cost option we can see here is the Electro Touch-Tuner self-seeking radio.

Power comes from the Firepower, 331.1 cubic inch hemi V8 engine that produces 250 horsepower. This is paired with “PowerFlite” automatic transmission which also came as standard.

Imperial Newport prices started at $4,720 back in the 1955 model year with a total of 3,418 being sold. These were relatively expensive cars at the time coming in a slightly more than a Cadillac Coupe de Ville of the same year.

This ’55 Imperial Newport is currently for sale on eBay. (follow the link for even more photos)