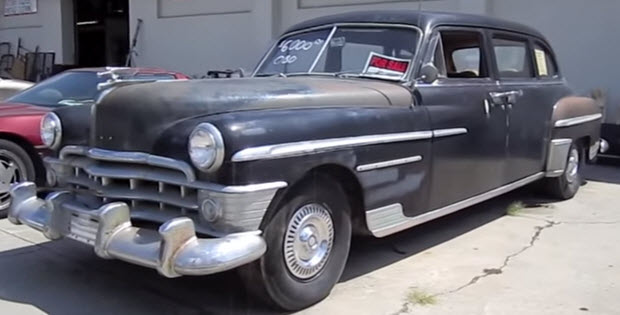 Here we have an original 'as-found condition', 1950 Crown Imperial Limo which was originally owned by National Trailways Bus Line and used as a Limousine back in the day. It is powered by a 323.5 cubic inch inline eight engine and has a Fluid Drive transmission. Powered windows were standard on the Crown Imperial.

Imperial was not a separate brand until 1954. This 1950 Imperial was essentially a Chrysler New Yorker with a different interior.

There were only 205 Crown Imperial Limos produced for 1950 at a factory price of $5,334. To put that price in perspective a 1950 Cadillac Fleetwood Series 75 Imperial Limosine for the same year would have cost $4,959. A typical four-door family car such as the 1950 Chevrolet Styleline Deluxe  would have cost $1,529. You can see the Imperial was right up there at the top of the market.

It's a rare car indeed, as even the four-door sedan only sold 209 units.