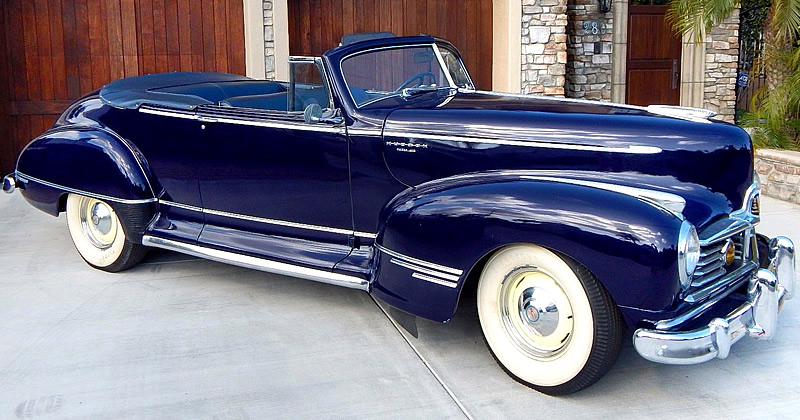 Here's something you don't come across very often. With only 1,462 Super Six Convertible Broughams built for the 1947 model year, there can't be too many left.

Hudson, founded in 1909, merged with the Nash-Kelvinator Corporation to form American Motors (AMC) in 1954. The Nash name was to last only until 1957 when it was discontinued.

The 1947 Hudsons looks very similar to the 1946 cars with minimal design changes made. Essentially these were based on the 1942 pre-war bodies, much like most of the manufacturers at the time. The woodgrain dash is a thing of beauty. In the center is the optional radio, a 30-hour wind up clock was standard on the Super but you could opt for an electric one at $13. The convertibles came with a leather interior as standard. Wow. What a dash!

Under the hood is Hudson's 212 cubic inch "Super-Six" engine that outputs 102 horsepower. This is paired with a three-speed synchronized silent mesh transmission with column shift. Hudson managed to sell a total of 93,910 cars for the 1947 model year. It was also the year they produced their three millionth car.

This Hudson is currently for sale﻿﻿ on eBay. (follow the link for even more photos﻿)