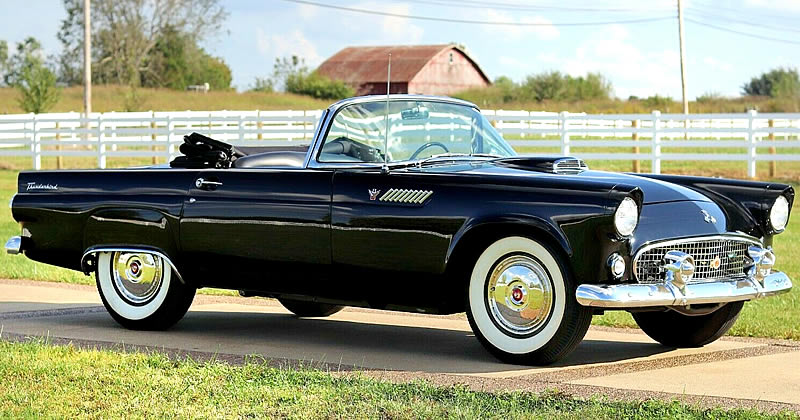 Here is the car that was going to go on to wow movie stars and symbolize the glamour and utopia of the fifties – The 1955 Ford Thunderbird.

The Corvette, while not selling in great numbers, had been drawing attention for a couple of years and Ford needed a rival for the two-seater. However, they wanted something that offered more luxury and they weren’t going to go the fiberglass route – it’s a steel body. The Thunderbird name was taken from a south-west Native American god who brought rain and prosperity.

A major selling point for the Thunderbird was that while it looked like a sports car, it was full-size and shared many parts with Ford’s regular line of cars.

Arguably, the T-bird is the greatest and most collectable product that Ford produced post-war and is very desirable with collectors today.

The bulge on the hood is necessary to clear the air filter.

Due to its popularity, the styling and name that was to be carried over to Ford’s full-size models with marketing material proudly displaying “Thunderbird Styling”.

Inside, the instrument panel is simple yet functional – note the tachometer on the left. This is a nicely optioned car with Master-Guide power steering, powered 4-way seat and and powered windows costing $91, $65 and $70 respectively. Interestingly, the push-button radio was more expensive than any of them coming in at an additional $99 when the car was ordered new.

Under the hood the, brand new for ’55, 292 cubic inch V8 was standard. Chrome dress-up kits were $25 extra. There were two compression ratios used on this engine. 8.1:1 producing 193 horsepower and 8.5:1 producing 198 hp. The lower ratio used for manual transmission cars. This car is a Ford-O-Matic drive automatic transmission which would have cost the original owner an additional $178.

Ford had really hit the ball out of the park with the Thunderbird with 16,155 produced in its first year of production. Compare that to the Corvette with just 700 of them being sold in 1955 and it was in its third year of production. Once the T-bird became a 4-seater in 1958 then sales really started to take off and leave the Corvette standing. Even during those first three years as a single seater, over 53,000 Thunderbirds were produced.

It was a hot product for sure, but who would have guessed the model name would continue for over 40 years and build such a loyal fan base?

If you wanted a Thunderbird during the 1955 model year the base price was $2,944 with all of them being convertibles. They came from the factory with a soft top but you could opt for an additional fibreglass hardtop for a further $290.

Fortunately many of these early cars survived due to the fact they became collectable so early in their lives. Even during the sixties these cars retained their values better than other cars.

This ’55 Thunderbird is currently for sale on eBay. (follow the link for even more photos)