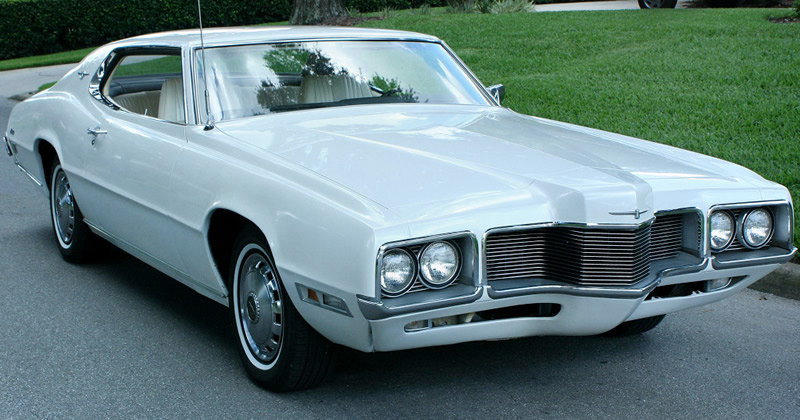 Since 1967 the Thunderbird was in its fifth generation. There were a few changes this year (although it was mostly a carry-over year), with the most noticeable being the beak-like shape protruding from the front of this 1970 Ford Thunderbird 2-Door Hardtop.

The bumper and grille blends in such a way that the bumper is barely visible, the windshield wipers are also hidden both adding to the car’s clean lines.

At the rear is Thunderbird’s full-width taillights that incorporate sequential turn signals.

The wraparound rear seats are a distinctive Thunderbird feature.

You can see the white vinyl interior with optional bucket seats with center console and teak-tones appliques on the instrument panel.

The standard engine for the T-Bird in 1970 was the mighty 429 cubic inch Cobra engine with 4-barrel carburetor producing 360 horsepower. Paired with the Cruise-O-Matic automatic transmission it made for a smooth drive with plenty of power.

As well as the large V8 and automatic transmission being standard, power brakes (and front discs) and power steering were also offered as part of the basic package.

For the first 40 years of its life this car was owned by the same family. The original owner gave it to their son who clearly cared for it as much as his parents. And, even today, there are just 69,000 miles on the odometer.