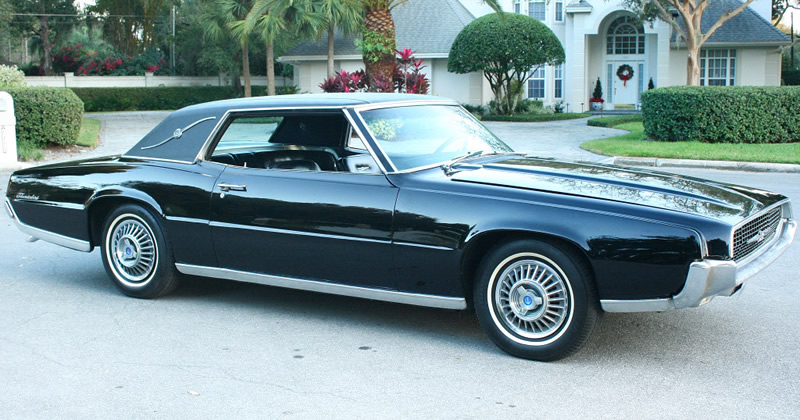 Thunderbird was now in its fifth generation and subject of a major restyle. It was the first year in Thunderbird history that a 4-door version was also in the line-up. It was also the year that the convertible was dropped.

It was a larger car this year – it had grown an inch and a half in length with another two inches added to the wheelbase (the four door had another two inches on top of that). The unibody was no more and Ford were using body-on-frame construction.

There was a new, longer snout nose with crisp, lattice-work grille with a Thunderbird ornament set in the center. The grille was framed in bright metal and also contained the concealed headlights. The rear was a bit more familiar as Ford were still using full-width taillamps and sequential turn signals.

Ford were emphasizing the luxury of the Thunderbird and making it more Lincoln-like. It had now become more of a luxury / personal car rather than the 2-door, four-seater that had leanings towards a sports car. Its primary competition would now be cars like the Buick Riviera and Oldsmobile Toronado. This car’s interior still enjoys its original black bucket seat interior and console. That’s the original dash, carpet and door panels. The headliner is original too! Comfort in the back

It’s fitted with the original factory 390 cubic inch V8 producing 315 horsepower. This is paired with a Cruise-O-Matic automatic transmission. Both were standard.

Ford sold 37,422 Thunderbird Landau 2-door hardtops in the 1967 model year. It was by far the most popular of the three Thunderbird models available that year. It had a base price of $4,704. This car is also fitted with factory air conditioning which was a $421 option. Also ordered originally with the car were power windows at $104. It was built in the Wixom, Michigan assembly plant.

From the early, sporty classic two-seater to the 4-door passenger cars – this book covers them.