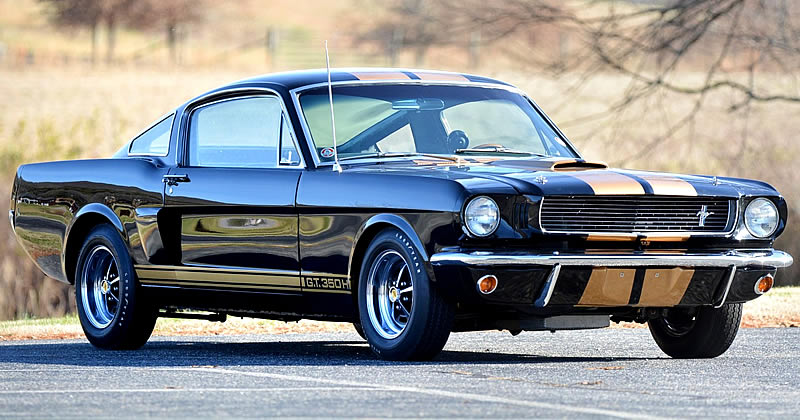 Imagine being able to pop into your local Hertz and rent a race car? These were different times and, in 1966 you could do just that.

After Carroll Shelby and his General Manager, Peyton Cramer met with Hertz hoping to make a few more sales of their GT-350. What they actually walked away with was an order for 200 cars, followed by another just a few weeks later for a further 800 cars.

Most of these cars were painted in Hertz colors – Raven Black with Bronze metallic stripes (as you see here). However, there were around 230 cars in standard Shelby colors such as; Candy Apple Red, Guardsman Blue and Ivy Green – but still with gold stripes.

The side view shows the functional scoops to help with rear brake cooling.

If you were over 25 and a member of the Hertz Sports Car Club you could rent a GT-350H for $17 per day or $70 per week and 17 cents a mile. You’d need some extra money for fuel though with these cars using around a gallon every 6 to 8 miles. Gas was only around 32 cents per gallon but it would have added up.

While the standard GT-350 came with no rear seat as standard (you could opt to have it for an additional $75), the Hertz version all came with the rear seat in situ. The GT-350H also came with the luxury of a radio.

Under the Hood sits a 289 V8 paired with a 4-speed manual transmission. After Shelby worked their magic This provided 306 horsepower which was an 35 hp improvement on the 289 hi-po engine it was based on.

After input from Hertz hoping to reduce the amount of abuse these cars would receive, there were some changes with later cars fitted with C4 automatic transmissions. This resulted in around 800+ cars having the C4, meaning this GT-350H is likely to be part of the initial order.

As a race car there is no luxury of power steering or power brakes. Interestingly though, as the cars used competition brakes, they weren’t as effective at braking when cold, needing much more pressure to be applied. A sticker was placed on the dash to warn drivers of this fact.

Still, after some complaints and a few bent noses, a brake booster was added to the later cars.

These “Rent-a-Racer” cars were serious machines and would have been great fun to have for a few days and it must have proved difficult to hand back the keys. For those lucky enough to own one today they have a wonderful and significant part of motoring history.

This ’66 Shelby GT-350H is currently for sale on eBay. (follow the link for even more photos)