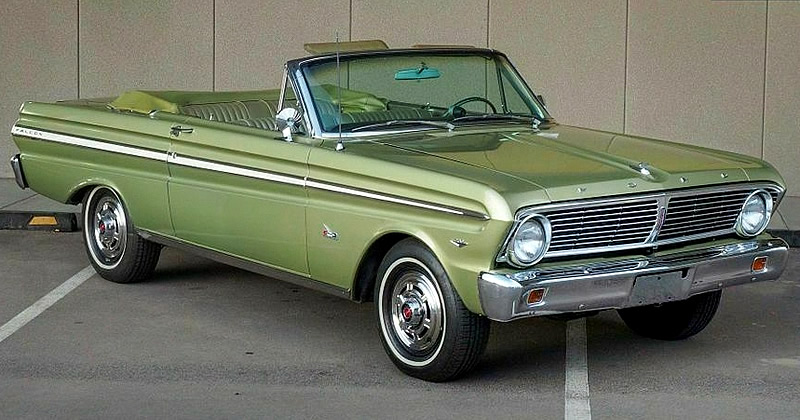 Having been introduced for the 1960 model year, the compact Falcon (well, compact for its time) had proven popular from the moment it was launched with over 435,000 sold in that first year.

The top-trim Falcon ‘Futura’ series originally just contained a 2-door sport coupe. It wasn’t until 1963 that it was joined by several other models the same time that we finally saw a convertible Falcon.

1964 saw a brand new look giving the Falcon a wedge shape – a style that was to continue for ’65 with just minor trim changes.

There were 15 single tones and 16 two-tone upholstery combinations (the latter not available in the convertible and 2-door hardtops) available for ’65.

Options on this car include power steering, power brakes and an AM radio.

Under the hood sits a 200 horsepower, 289 cubic inch (C-code) V8. The original owner would have paid an additional $153 to have this rather than the standard 200 cubic inch, 6-cylinder engine that output 120 horsepower. They also opted for a Cruise-O-Matic automatic transmission costing $182

Just 6,515 Falcon Futura convertibles were sold during the 1965 model year. This was a drop from over 20,000 for 1964. Why the big drop? You’ve guessed it – the launch of the Mustang. Priced at $4,481 the Falcon convertible was priced at just $133 less than the Mustang ragtop. Falcon coupe sales fell for exactly the same reason.

The result was 1965 was the final year that we would see a Falcon convertible.

This ’65 Falcon Convertible is currently for sale on eBay. (follow the link for even more photos)