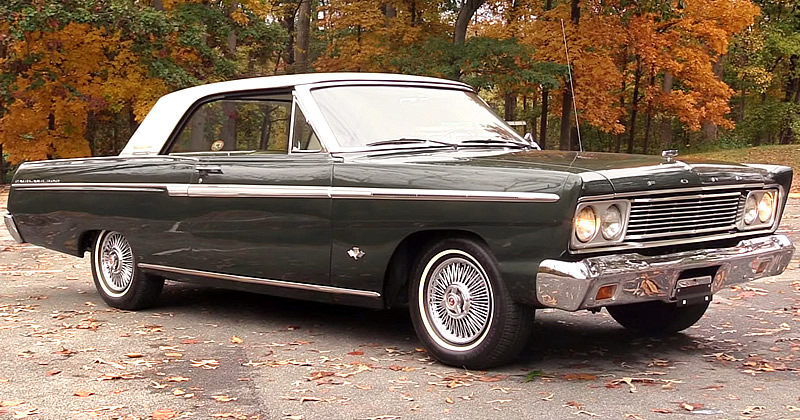 Here we have a beautiful 1965 Ford Fairlane 500 Sports Coupe in Ivy Green and contrasting Ivy Gold pleated vinyl interior. It has a 289 cubic inch V8 with 3-speed Cruise-O-Matic automatic transmission (a $190 option). The Sports Coupe had the shift located on the console rather than being a column shift in the other models equipped with a bench seat.

New for '65 was the two-spoke, 16 inch color-keyed steering wheel with a 1-piece chrome horn ring. As the Fairlane 500 was top of the line it also received extra trim such as; chrome window moldings, front and rear armrests, a Ford crest on the C-pillar, hood ornament and a distinctive chrome strip with aluminum insert that ran the length of the car. The Fairlane 500 was also lucky enough to receive carpets rather than vinyl floor mats found in the other Fairlane models.

The 1965 model year was the last of the fourth generation Fairlanes that ran from 1962-65. Although there were a few subtle updates during this run, the '65 was the only one to receive a total face-lift before another complete change for 1966 - making the '65 a rather unique car indeed.