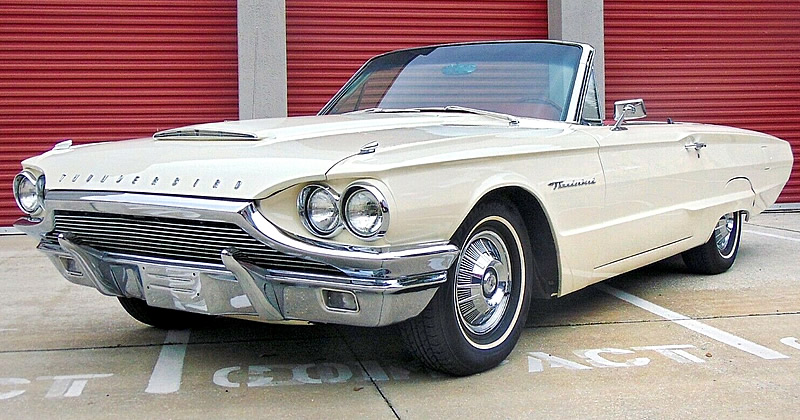 The 1964 Ford Thunderbird was equipped with a 390 cubic inch (6.4 liter) V8 with Cruise-O-Matic automatic transmission – both were standard in the T-Bird.

1964 saw Ford restyling the Thunderbird, it was the fourth time since its introduction in 1955. It had actually seen slow down in sales during 1963 and the new look for ’64 resulted in a boost of 30,000 extra sales.

This particular T-Bird has been in the same family for 50 years and was treated to a complete cosmetic and mechanical restoration back in 2005 – still looks great doesn’t it?

This new fourth generation had a more squared off appearance. This was particularly evident from the rear. Note too the departure from round taillights to square ones.

The front end had a more aggressive look and the hood now featured a new scoop (power dome) on the top. ‘Thunderbird’ was now featured in script on the front fenders behind the front wheels.

We now saw THUNDERBIRD spelled out in letters across the front of the hood, rather than the emblem that adorned the 1963 models (lettering actually removed on this car).

Some Available Thunderbird Options for ’64

This ’64 Thunderbird is currently for sale on eBay. (follow the link for even more photos)