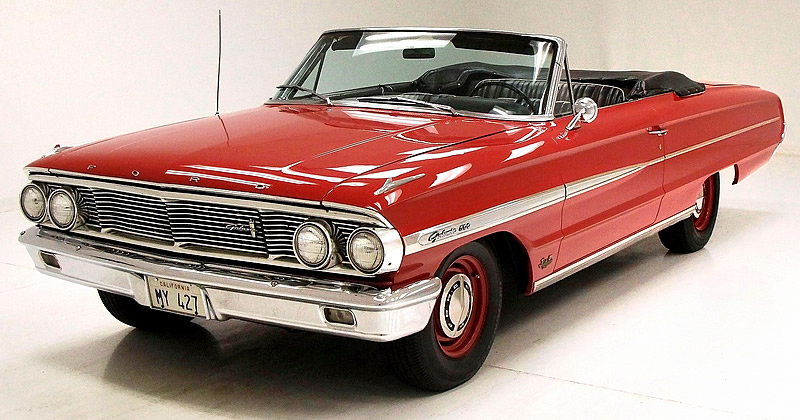 Amongst some of the best looking Fords of the sixties was the 1964 Ford Galaxie 500 and particularly in Convertible form.

This particular car spent its life in California and now has a special surprise under the hood. With its poverty hubcaps it certainly looks unassuming.

Round taillights had become something you expected from Ford having been used for years – although strangely they dropped them in 1960 only to reappear in 1961.

There’s plenty of comfort in the back too with the 100% Foam-Cushioned “Shell Contoured” rear seats. The convertible top is concealed under the padded boot which has concealed fasteners.

The V8 Galaxie came standard with a 195 horsepower 289 cubic inch engine. This car was purchased with a Thunderbird 390 cubic inch V8 that provided 300 horsepower and cost an additional $117 with a 4-speed manual transmission.

However, this car was later fitted with a 406 cubic inch V8 that outputs a massive 470 hp.

This ’64 Galaxie 500 Convertible is currently for sale on eBay. (follow the link for even more photos)