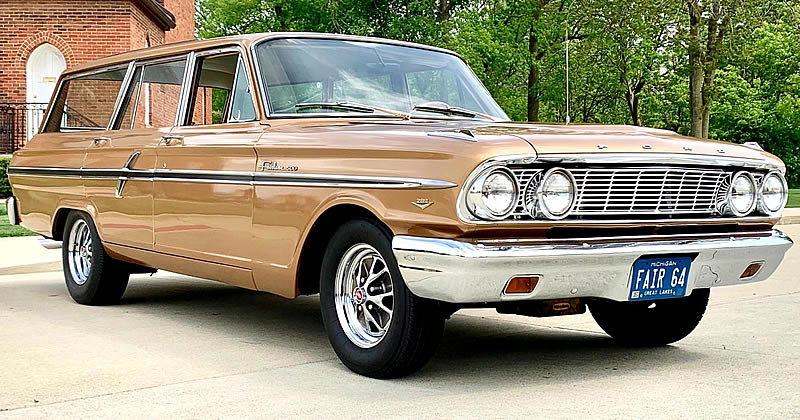 Fairlane was Ford’s intermediate-size line-up in 1964 and contained two station wagons. The Ranch Wagon, belonging to the standard Fairlane series, and the more upmarket Custom Ranch Wagon which was a Fairlane 500.

Ford’s 1964 restyle resulted in a front that looked more like its big brother the Galaxie. It’s just as well really as this was a great year for Ford looks-wise.

At the rear, things were more like the Galaxies of 1963 with very similar rear fenders and taillights. Tail fins had now also gone for good.

The cargo space has a capacity of 98.6 cubic feet which wasn’t that far off of their full-size cousins.

Although this is a 6-passenger version, these station wagons could also be ordered with a handy rear facing additional seat that boosted the passenger capacity of this wagon to eight people.

Inside, the 500 enjoys full carpeting rather than the rubber matting of a standard Fairlane. It also has full-vinyl seat covers instead of cloth and vinyl.

Under the hood this Prairie Bronze beauty originally came with a 289 V8 Challenger (195 horsepower). It now has a more powerful 347 cubic inch V8 with Edelbrock power package giving it even more brute force.

If you wanted to order one of these Custom Ranch Wagons back in ’64, prices started at $2,612 for the six-cylinder version and another $100 for the 289 V8 that this car was originally fitted with. There was a total of 24,962 Custom Ranch Wagons sold for the 1964 model year.

This ’64 Ford Ranch Wagon is currently for sale on eBay. (follow the link for even more photos)