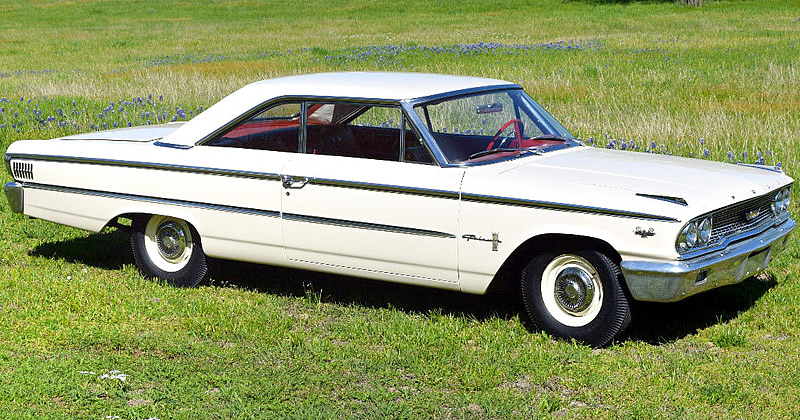 Well here’s something that you really don’t see very often. What looks like a fairly ordinary Galaxie Fastback is actually a 1963 (strictly speaking it is a 1963½) R-Code Factory ‘Lightweight’ Galaxie.

Equipped with a 427 cubic inch V8 with TWO four-barrel carburetors that pushed out around 425 horsepower.

There was heavy competition to do well at the drag strip during the sixties, pushing Ford to produce these lightweight and powerful cars. After an initial run plan of 50 cars,  a total of around 212 of them were ever produced.

Constructed with a hood, fenders, inner fenders and deck lid made from fiberglass. Flooring was thin rubber instead of carpet. To further reduce weight the car used aluminum bumpers and brackets.

All but one of these cars were produced in Corinthian White with a red vinyl interior. Lightweight bucket seats were used and there is no heater, radio or clock. Even the armrests are absent. This all added up to hundreds of pounds of reduced weight.

The glovebox contains a plaque that highlights the construction techniques (and its shortcomings)  can be found on the door of the glove box.

It’s uncertain how many of these cars are left of the rather limited production run. It’s likely that many of them led a hard and short life in competition. This is a very rare and powerful beast of a car.