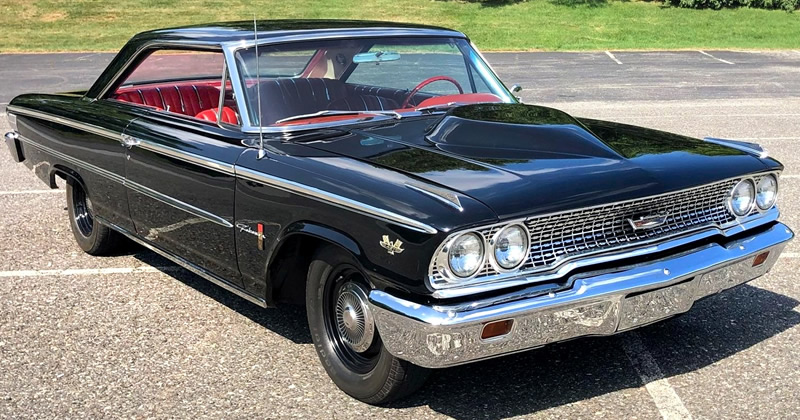 1963 was an exciting year for those that liked some serious power as Ford introduced their most powerful engines yet. There were two different 427 big blocks now available outputting 410hp and 425hp replacing the 406.

It was also the year that Galaxie saw the new fastback (Sports Hardtop) introduced. It proved immediately popular resulting in around 135,000 of the 774,882 Galaxies sold that year using the fastback roofline. Not bad considering the new shape was launched in the middle of the model year.

Galaxie 500 was the top-of-the-line full-sized Ford that year with the XL version (standing for extra lively and extra luxury – at least according to Ford’s marketing materials). Other advertising slogans at the time included; “Total Performance” and “The Super Torque Fords” – the horsepower race was now well underway.

The new concave grille styling at the front of the car was mirrored at the rear.

Inside, the XL interior came with bucket seats, floor mounted transmission selector as standard. The bright red vinyl you see here was one of nine trim choices.

Under the hood is where the real magic is, the new for ’63, R-code 427 cubic inch V8 that outputs 425 horsepower and is equipped with dual 4-barrel carburetors.

If the noise of the big block wasn’t enough, fender emblems let people know about the mighty 427 power.

This ’63 Ford Galaxie 500XL 427 is currently for sale on eBay. (follow the link for even more photos)