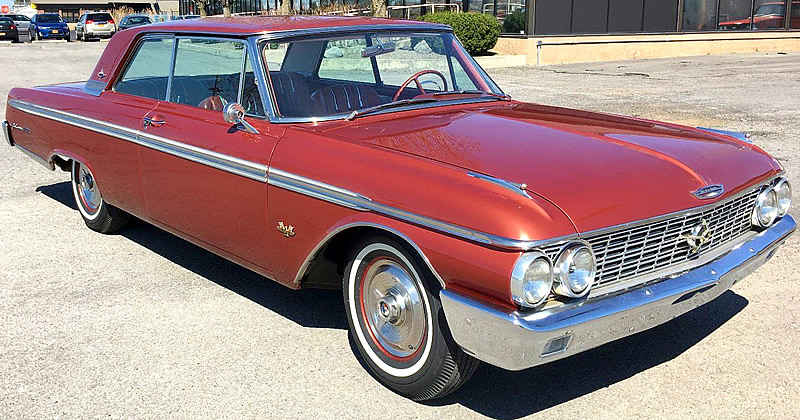 The Galaxie 500 had been around for a few years and was the full-size, top-of-the-line Ford. In fact, now the Fairlane was officially a mid-size, the Galaxie was the only full-size model Ford had on offer.

1962 saw the launch of the Galaxie 500XL which took the top crown and was the sporty series of the Galaxie line-up. Actually introduced in February 1962 it was several months into the ’62 model year. There were two models, the Club Victoria you see here and a Sunliner convertible.

1962 saw a redesign of the Galaxie from the beltline down. The full-width grille remained although it was restyled. At the rear the fins were gone but the large round taillights were still there. GALAXIE model designation was spelled out across the trunk lid in block letters replacing the script used in 1961.

This 1962 Ford Galaxie 500XL Club Victoria in Chestnut metallic paint was the subject of an extensive frame off restoration that took many years. Sadly the owner died before he could see this wonderful car reach completion. His buddies got together and helped get the final touches completed.

The interior of the 500XL enjoys deep foam cushioned bucket seats with floor mounted transmission selector mounted in the command console. It came with all-vinyl as standard although this car has optional leather seating.

Under the hood this Galaxie 500XL has the biggest engine Ford had on offer that year – the mighty 406 cubic inch Thunderbird Special V8 (code G) with 3 x 2-barrel carburetors with a total output of 405 horsepower! This is paired with a 4-speed manual transmission. This would have put a further $488.70 on to the base price. Note: This isn’t the original 406 that came with the car but it is period correct with the correct casting number. The VIN indicates this was definitely a 406 Galaxie when it left the Mahwah, NJ assembly plant.

In total Ford produced 575,124 Galaxies, a figure that didn’t include the station wagons that were contained within the Galaxie series. It was a great year for Ford.