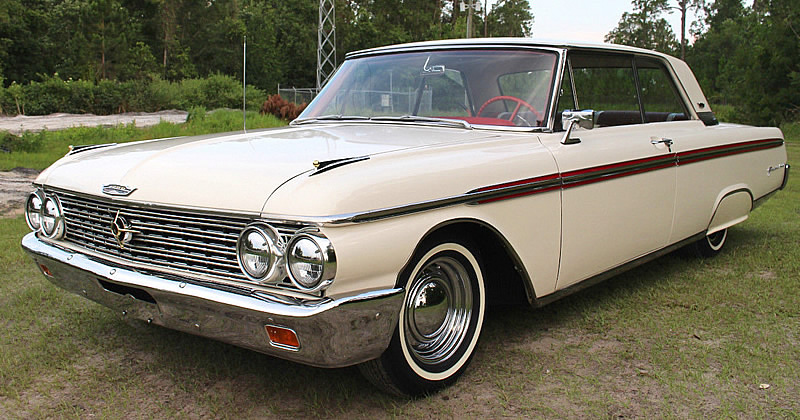 It is fitted with a 352 cubic inch V8, which is an option upgrade from the standard 292 V8. In fact there were FIVE V8s to choose from. Transmission is a Cruise-O-Matic automatic, again an option over the standard 3-speed manual. The car also benefits from optional power steering.

And check out this amazing interior - believed to be original. Galaxie 500 was the top level for 1962. What was left of the tail fins in 1961 were now gone completely.  The body was pretty much slab-sided except for a horizontal feature line running along the beltline - this was accented with a chrome strip. Note also the rocker panel moldings, chrome window moldings, ribbed molding on the C-pillar and Galaxie 500 script in the rear fender.

At the rear of the car Ford continued their tradition of using large, round taillights. These were separated by a large escutcheon panel (only on the 500s and XL) and the model name spelled out, in block letters across the trunk lid.

Some available Ford options in 1962