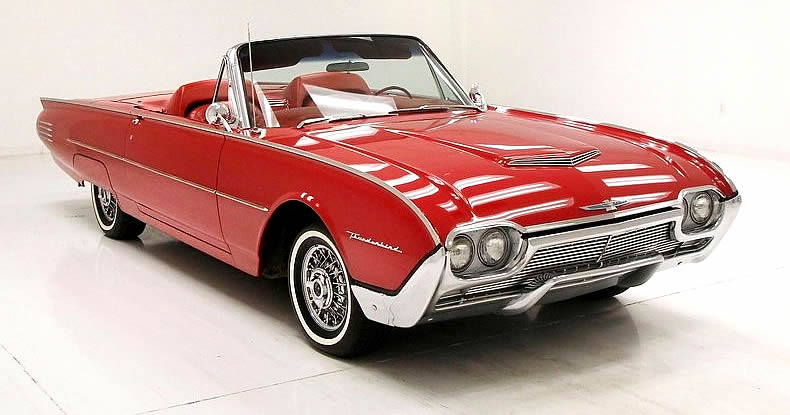 Ford had been busy over the previous few years with plenty of revisions to their cars. As with the rest of the line-up, 1961 saw a totally new Thunderbird. Or rather, as Ford put it… “Unmistakably new… Unmistakably Thunderbird”.

This 1961 Ford Thunderbird Convertible shows us the new bullet-like appearance to the front end introduced that year. We were now in the third generation T-Bird which was to last through to 1963 and are now affectionately known as the “Bullet Birds”.  If you take a look at the Lincoln continental of the same year there are definitely some similarities in the front end. Particularly the headlights and front grille.

Side trim and sculpting seen in previous years was kept to a minimum with the four side hash marks being the exception. At the rear of the car the triple taillights on each side were now gone in favor of a single unit each side. Clearly the jet age was having a big influence.

You can see the changes by comparing to the 1960 Thun﻿﻿﻿﻿derbird.

Thunderbird came with plenty of standard features. MagicAire heater and defroster, Master-Guide power steering, Swift Sure power brakes, an electric clock, Pushbutton AM radio and full wheel covers were all included in the standard Thunderbird price. Power comes from a 390 cubic inch (6.4L) Thunderbird V8 with 4-barrel carburetor producing 300 horsepower. This is paired with a Cruise-O-Matic automatic transmission. Again, both standard on the T-Bird that year. Originally built in the Wixom, MI assembly plant, this is one of 62,535 two-door hardtop Thunderbird cars built for the 1961 model year. The base price would have been $4,170.

This ’61 Thunderbird is currently for sale on eBay. (follow the link for even more photos﻿)