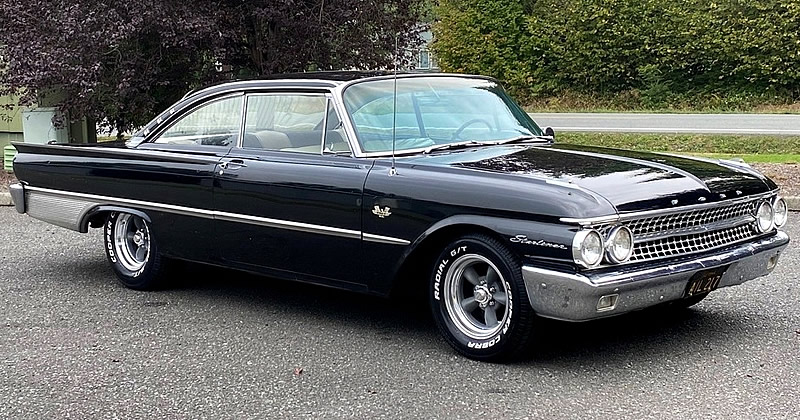 With completely new sheet metal from the beltline down, the new Fords for 1961 had received a restyle intended to give them the “Classic Ford Look”, a nod towards the stylish 1957 and 1959 cars.

The 1960 Ford cars had received a hurried redesign in response to Chevrolet’s plans for 1959 and the ’61 models aimed to put things back on track. They featured somewhat conservative fins and a return of the large, round taillights that had proved a popular part of the Ford look.

Although part of the top-of-the-line Galaxie Series, the Starliner featured a distinct C-pillar that differed from the Thunderbird styled roofline of the other cars and offered a thin-pillared, bubble-like fastback roof.

It was made even nicer with hardtop styling (the absence of a B-pillar) and three, four-point star ornaments placed along the C-pillar.

The ribbed-aluminum stone shields behind the rear wheel openings were standard on Galaxie models. The trunk opens over 4 feet wide and has a volume of over 30 cubic feet.

Inside is the new for ’61 Ford instrument panel – that’s a Starliner script on the glovebox.

Under the hood is the original 390 cubic inch V8 (Z code) that produces 300 horsepower. This would have cost the original owner a further $197 over the base six-cylinder.

Despite its beauty and uniqueness, the Starliner was the slowest seller of the Galaxie lineup in 1961. Ford sold 29,669 of them which was less than half the number sold the previous year. This was to be the end of the Starliner which became a two-year only model.

Prices started at $2,597 for the six-cylinder with another $116 getting you the base V8, a 292 cubic inch Thunderbird engine.

This 1961 Starliner is currently for sale on eBay. (follow the link for even more photos)