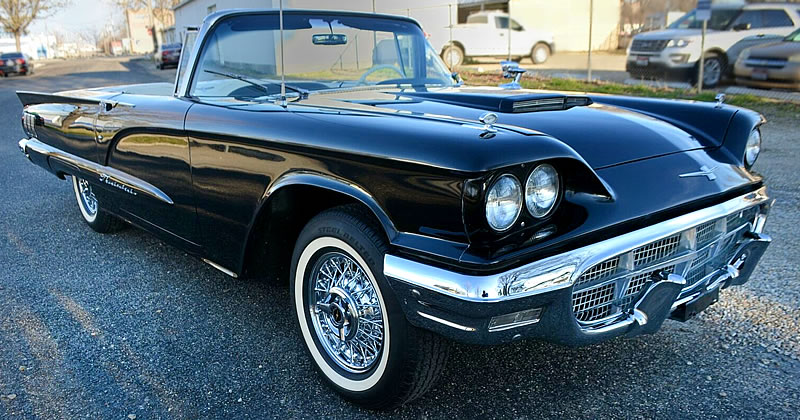 The World’s Most Wanted Car was how Ford described the new Thunderbird for 1960. It might have not been the best selling car overall that year but it was the biggest selling year for Thunderbird so far!

This 1960 Ford Thunderbird Convertible in Black was original built in Wixom, MI. A fairly new plant at the time built to handle construction of the Thunderbird and Lincoln cars.

This was the final year for the second generation Thunderbirds (Square Birds), an era that marked the start of the four-seater T-Bird. One of the most recognizable features of the ’60 models was the row of three taillights on each side rather than two that had been there previously.

The inside of the Thunderbird has unique cockpit styling and features bucket seats and console, something we take for granted now, was something that hadn’t really been seen in American cars until this generation of T-Bird.

The T-Bird came with a (Y code) 352 cubic inch V8 Thunderbird Special V8 engine with 4-barrel carburetor as standard. For an extra $177 you could get a 430 cubic inch V8 (J code) that output 350 horsepower that was an additional 50 hp. This J-code car has since been fitted with a slightly later 351 V8.

Although a 3-speed manual transmission was standard, nearly 98% of all Thunderbird’s in 1960 had automatic transmission! This would have cost original buyers an additional $242 for the Cruise-O-Matic.

This ’60 Thunderbird is currently for sale on eBay. (follow the link for even more photos)