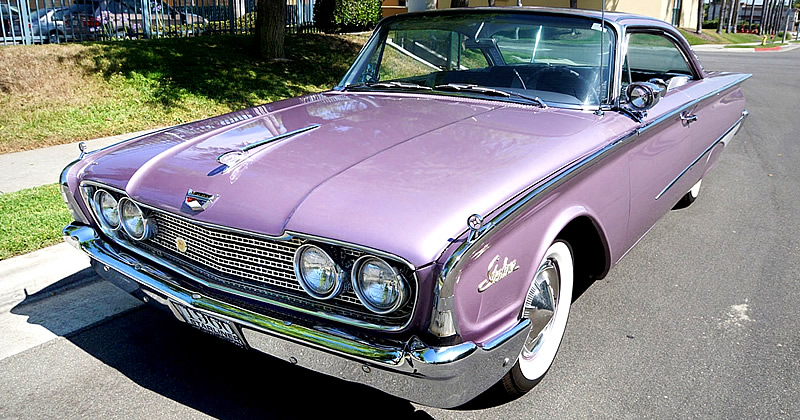 The Starliner was the fastback coupe in the Galaxie line-up with its distinctively styles thin pillars and star ornaments and was introduced for 1960 and lasted just 2 years.

The Galaxie name was first introduced in 1959 to identify the top of the line cars, replacing the Fairlane 500 series.

Fords were totally new for 1960 with only the engines and drivelines being carried over. It had arguably some of the smoothest lines seen on a Ford.

This car left the factory painted in Orchid Gray which, despite how it sounds, is the lilac color you see here.

Ford referred to the Starliner as a ‘sports car with 6-passenger room’. While it does look quite sporty and can certainly carry size passengers, at over 17 feet long and 6½ feet wide “sports car” was a bit of a stretch – literally! These new cars were actually longer, lower and wider than their predecessors.

The full-size models could have turned out very different and were originally going to be based on the 1959 platform. However, having got wind of the new Chevrolet designs original plans were scrapped and an all-new design was hurried along.

A nice touch is the trunk lock hidden under the “S” of the Starliner script. Only the Starliner and Sunliner had their names on the trunk – other Galaxies just carried the Galaxie name.

In 1960 the Starliner started at $2,610 and came with a 223 mileage Maker Six as standard. However, most buyers opted for a V8 with the original owner of this car paying $318 for a 292 cubic inch Thunderbird V8 and Ford-O-Matic automatic transmission.

This ’60 Ford Starliner is currently for sale on eBay. (follow the link for even more photos)