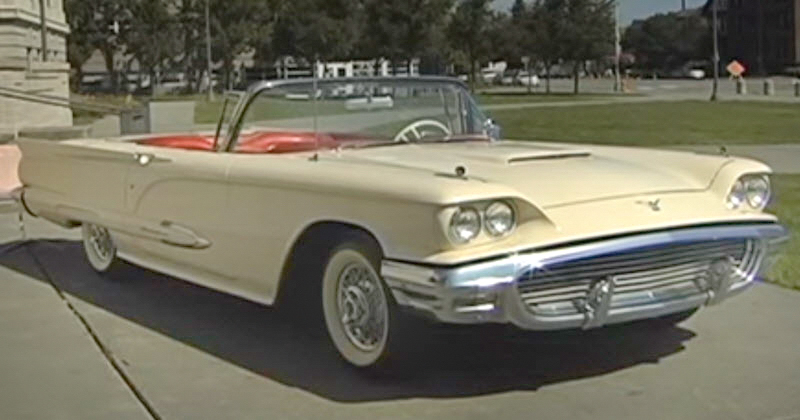 This 1959 Ford Thunderbird Convertible is painted in Casino Cream with red interior.

When the second generation Thunderbird was introduced in 1958 and became a four-seater, with 2 feet added to the length, there were those that doubted that it was a good idea. This was soon proved wrong when sales doubled that first year. In 1959 they almost doubled again - clearly Ford was on the right path.

These second generation T-Birds are affectionately known as "Square Birds" and lasted from 1958 to 1960.

1959 saw very little cosmetic change over the 1958 models. The grille was now made from horizontal bars rather than the honeycomb grille and the five hash marks were removed from the door bullets and replaced with a chrome arrow.

Ford told us that, "You join one of the happiest and most select groups in the world when you become a Thunderbird owner". That's probably still true today if you own one of these beauties!

It's great to listen to owners that have had their car for many years, especially with cars as nice as this that they only paid $1500 for!

From the early, sporty classic two-seater to the 4-door passenger cars - this book covers them.