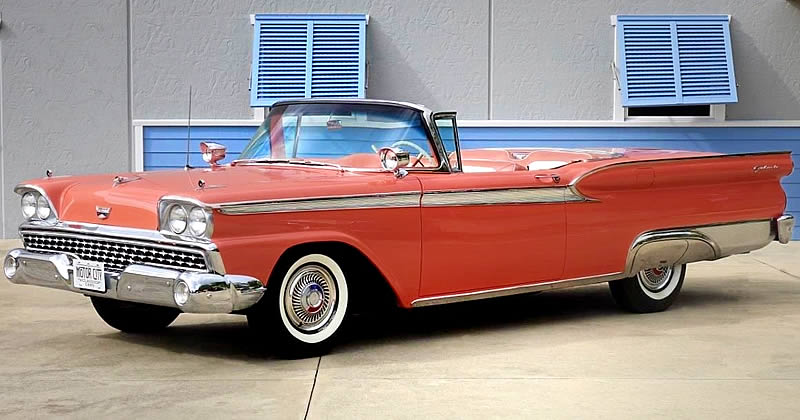 The design of the '59 Ford resulted in them receiving the Gold medal of the Comité Français des L'élegance of Paris.  You can see why when you look at this 1959 Ford Skyliner Retractable Hardtop. Added to that style is the fascinating top mechanism that still draws a crowd today, producing  a very desirable car.

It was certainly Ford's peak year for chrome on the front. The grille used four rows of floating stars - not too dissimilar to the 1958 and 1959 Buicks.

Presented here in 'Geranium', you have a car that captures the closing of the 1950s perfectly.

The retractable top was a very complex affair, with multiple motors, relays, circuit breakers, limit switches and over 600 feet of wiring! 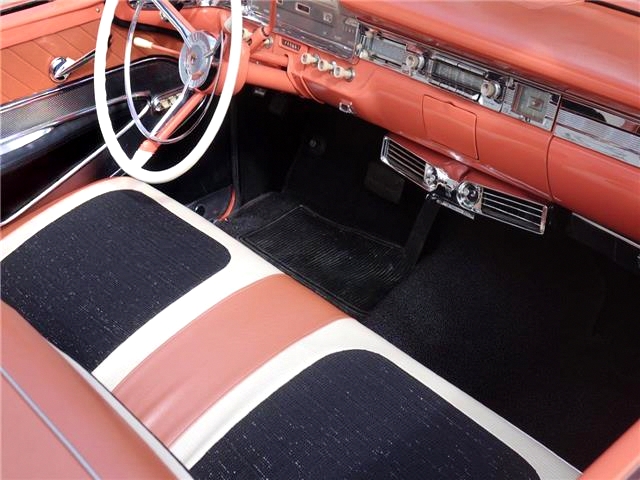 To confuse matters somewhat, Galaxie cars also carried Fairlane 500 badges on the trunk in addition to the Galaxie script on the rear fender, even though they were considered a separate series.

To separate the Galaxie it used the C-pillar from the Thunderbird rather than the thin pillar and wraparound rear window the other models have. What resulted was a very stylish looking car.

The great lines continue to the back of the car. Ford didn't go as far out as many of there rivals and fins were kept to a minimum. Note the backup lights housed in the tip of the fin. 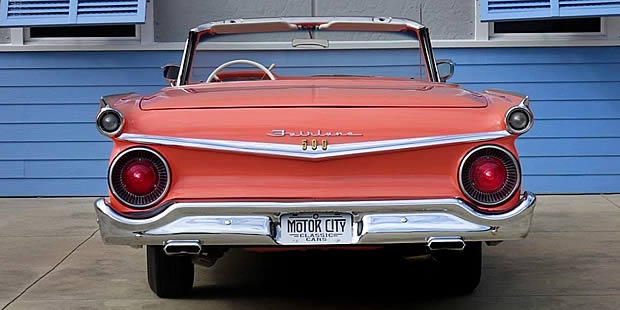 This car came with Thunderbird power - a 352 cubic inch V8 - 4 barrel Carburetor producing 300 hp with Cruise-O-Matic 3-speed automatic transmission. This combination would have cost an additional $280 on the purchase price when new.

1959 saw Ford reach a great milestone. They produced their 50 millionth vehicle. However, it was to be the last year for the Skyliner. Fears from the public that the complex top mechanism would be unreliable, poor trunk space when the top was down (luggage space was limited to inside the center container), not to mention the extra cost to buy one, contributed to its demise.

SOME AVAILABLE FORD OPTIONS FOR 1959

This '59 Skyliner is currently for sale on eBay. (follow the link for even more photos﻿)