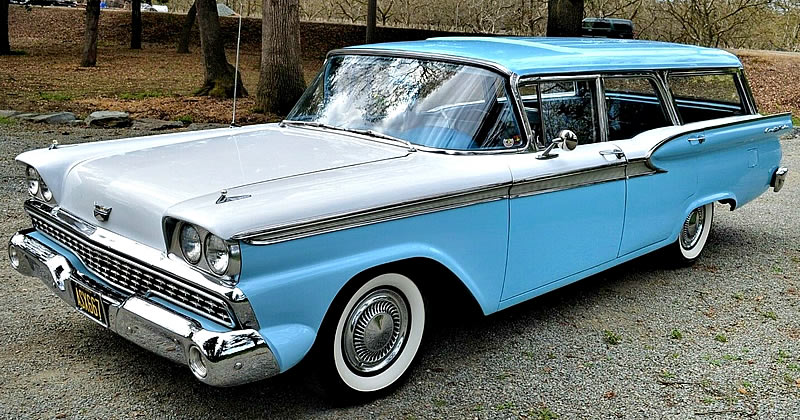 If you love 1950s station wagons then you are probably going to love this 1959 Ford Country Sedan Station Wagon that’s done just 90,000 miles in its lifetime.

This is a cross country cruiser than really looks the part in its original Wedgewood Blue and Colonial White paintwork. The previous Californian owner clearly looked after it during the 25 years they owned the car.

Ford described the Fordor 6-passenger Country Sedan as, “A husky 4-door model that combines the hauling ability of a wagon with extra appointments found only in a luxury sedan“. Trim levels on the Country Sedan station wagons were based on the Fairlane.

Inside there is a beautiful two-tone Radiant Blue Sof-Textured vinyl bolster and Blue Shantung pattern interior.

They also chose a Ford-O-Matic 2-speed automatic transmission instead of the standard 3-speed manual transmission at a total extra cost of $331 for the combination. A further $75 was spent on ‘Magic Circle’ power steering.

There’s nearly 8 feet of cargo space with the tailgate closed (with rear seats down).

Ford built 94,601 Country Sedan four-door, 6-passenger cars for the 1959 model year. Prices started at $2,863 for the base V8 version (there was a $118 premium over the six cylinder models). This particular car was original built in the San Jose, California assembly plant.

This ’59 Country Sedan is currently for sale on eBay. (follow the link for even more photos)