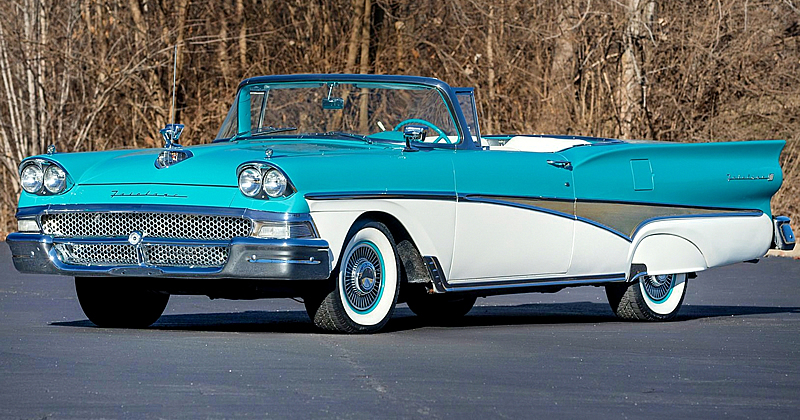 While most of us notice a fifties car, few draw a crowd like the Skyliner Retractable especially when they are in the condition of this great example from 1958. Part of the top-of-the-line Fairlane 500 series, these cars where a sign you had arrived, literally.

Of thirteen solid colors along with Style-Tone and two-tone options, this Gulfstream Blue / Colonia White combination is arguably one of the most eye-catching and attractive available for the ’58 Skyliner.

And here’s the side view with the top up showing the Thunderbird styled roof. The almost full-length trim with anodized gold insert was a distinctive feature of the Fairlane 500 cars.

At the rear you’ll see that it was much bigger than the other 1958 Fords so it could accommodate the roof and associated mechanisms. It obviously used different sheet metal to the other models in the line-up, costing Ford a small fortune that was never fully recouped.

Putting the top up and down was a complex affair involving multitude of power relays, circuit breakers, limit switches, drive motors, lock motors and around 600 feet of wiring! “Touch a button and this Skyliner removes its own steel top in less than a minute” was how the marketing described the retractable.

Interiors were upholstered with a combination of Royal Scot Tweed in a linen pattern and vinyl. This car is also equipped with Selectaire conditioning – a $395 option that was fitted at the factory from new. Note: this was also available as a dealer fitted accessory at the time.

All full-size Fords used the 223 cubic inch, inline six as the base engine except the Skyliner that could only be ordered with a a V8. The 265 horsepower Interceptor 332 Special was the standard V8 on all Fairlane 500 models.

If you wanted a Ford-O-Matic automatic transmission it cost an additional $180.

1958 saw Ford move back into the number 2 slot with Chevrolet reclaiming their number one position. Even so, Ford managed to sell well over one million cars.

While sales were relatively good only 14,713 Skyliner Retractable hardtops were sold during the ’58 model year at a base price of $3,138. Apart from the Thunderbird is was the most expensive model that Ford had available that year.

This ’58 Skyliner is currently for sale on eBay. (follow the link for even more photos)