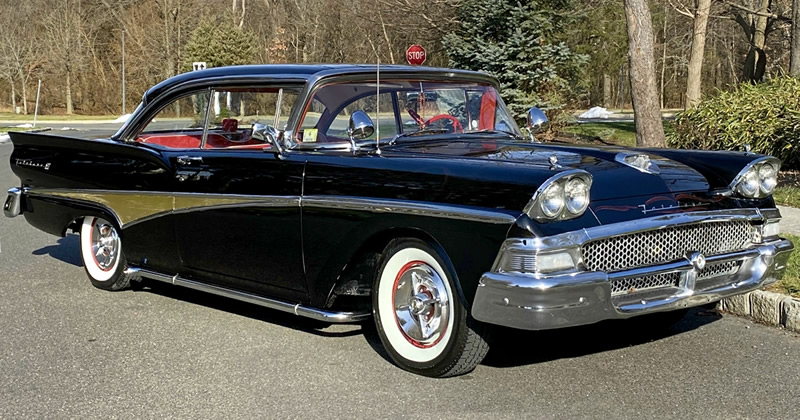 The 1958 Fairlane 500 Club Victoria is another great-looking car that Ford pulled out of the bag during the fifties.

Cashing in on the Thunderbird’s success, the big ’58 Ford’s were mirroring the look, with advertising at the time happy to shout about this “Thunderbird-inspired styling”. The is very evident when looking at the frontal design.

“An impulsive “WOW!” describes the way most people feel when they first see this dashing member of the Ford Victoria family” is how the original brochure described the Victoria cars. It’s a feeling that is still true today.

The longer, lower chrome trim with gold colored center section on the rear fenders was unique to the Fairlane 500. The standard Fairlanes feature a half oval shaped trim.

You can see this car has had the subtle addition of lake pipes.

Inside is the two-tone vinyl and vinyl pleated interior. Nylon and Vinyl was another option that year.

Under the hood is the “H” code 352 cubic inch Interceptor Special with 4-barrel carburetor which is rated at 300 horsepower. This was the top-of-the-line engine and would have cost an additional $236 on the purchase price. Another $197 would have been spent upgrading from the standard 3-speed manual transmission to a Cruise-O-Matic automatic transmission.

If you wanted a Fairlane 500 Victoria Coupe during the 1958 model year, prices started at $2,435 for the 6-cylinder version. It was a popular model with Ford selling 80,439 of them. It was not bad considering ’58 was a recession year and most manufacturers were suffering. It did result in Chevrolet taking the number one slot that Ford had held in 1957.

This 58 Fairlane 500 is currently for sale on eBay. (follow the link for even more photos)