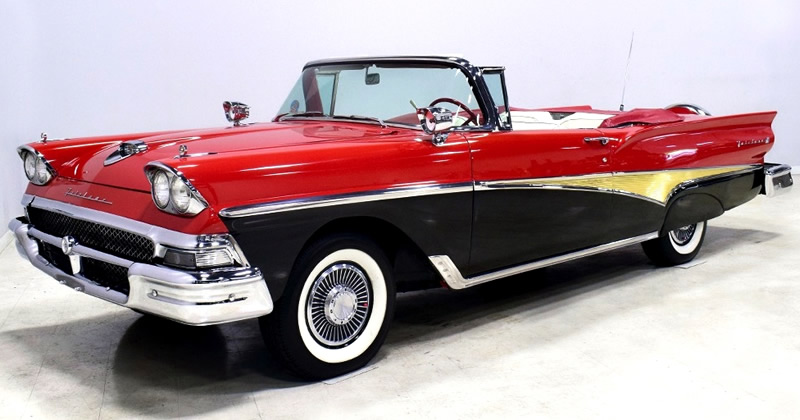 The Sunliner was the only soft-top convertible in the Ford full-size line-up for 1958. It sat in the Fairlane 500 series which offered the top trim levels that year. This beautiful Torch Red and Raven Black was subject of a thorough frame-off restoration using many NOS parts.

After the complete restyle of the previous year, the ’58 models shared the same body with some cosmetic changes. Most notable at the front was the use of a simulated hood scoop and honeycomb grille, styling ideas borrowed from the Thunderbird. Also at the front were dual headlights that most manufacturers had adopted following recent law changes.

At the rear, they were now using four oval taillights which was somewhat of a departure from the signature round lights that Ford had been using since 1952.

Along the side the Fairlane 500 trim was similar albeit reversed with the wide, gold anodized trim now sitting at the rear of the car.

Not all of the changes made to the styling of the ’58 were were for pure styling reasons – many were done to increase body panel strength.

Inside, the Sunliner had an all-vinyl interior with this red / white combination being one of five different combinations available.

Note the instrument panel was very similar to the ’57 models with its distinctive arcing speedometer.

Under the hood sits the top engine option for ’58, the 300 horsepower, Interceptor 352 cubic inch V8 that cost an additional $159 on the base price. The Cruise-O-Matic automatic transmission that it is paired with cost another $197 over the standard 3-speed manual transmission.

Other options on this car include power steering ($69), AM radio ($77), power seat ($64), power brakes ($37) and rarely seen remote trunk release located at the base of the driver’s seat.

This ’58 Ford Sunliner is currently for sale on eBay. (follow the link for even more photos)