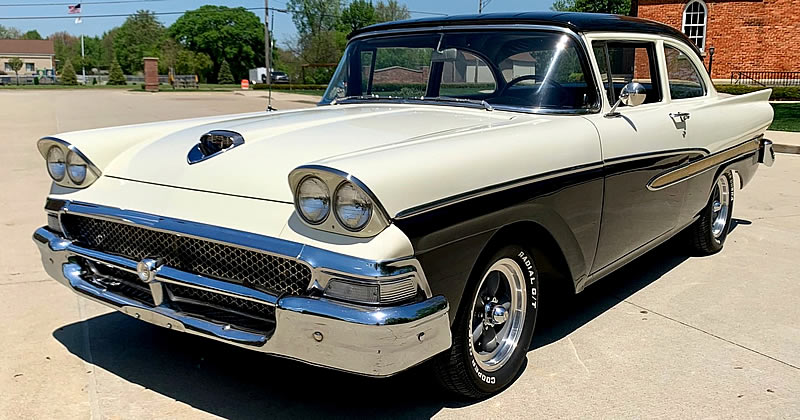 You’ve never seen such luxury in a car priced so low! stated the Ford literature of the time. The buying public seemed to agree with them as Ford sold over twice as many Custom 300’s as the Chevrolet equivalent, the Delray.

This Custom 300 looks great in Raven Black with Colonial White paint – a combination it left the factory with.

On the outside it has the “Styletone” trim package offering a double chrome strip with gold anodized insert.

The standard engine for the Custom 300 was a 223 inline six engine with a $137 charge if you wanted the 292 cubic inch V8. This car originally came with the former but has since had a mighty 460 cubic inch V8 installed. This is paired with a 3-speed automatic transmission with B&M shifter.

It looks like the original owner of this Custom 300 also opted for such luxuries as a clock at $15 and a MagicAire heater/defroster at $80.

This ’58 Ford Custom 300 is currently for sale on eBay. (follow the link for even more photos)